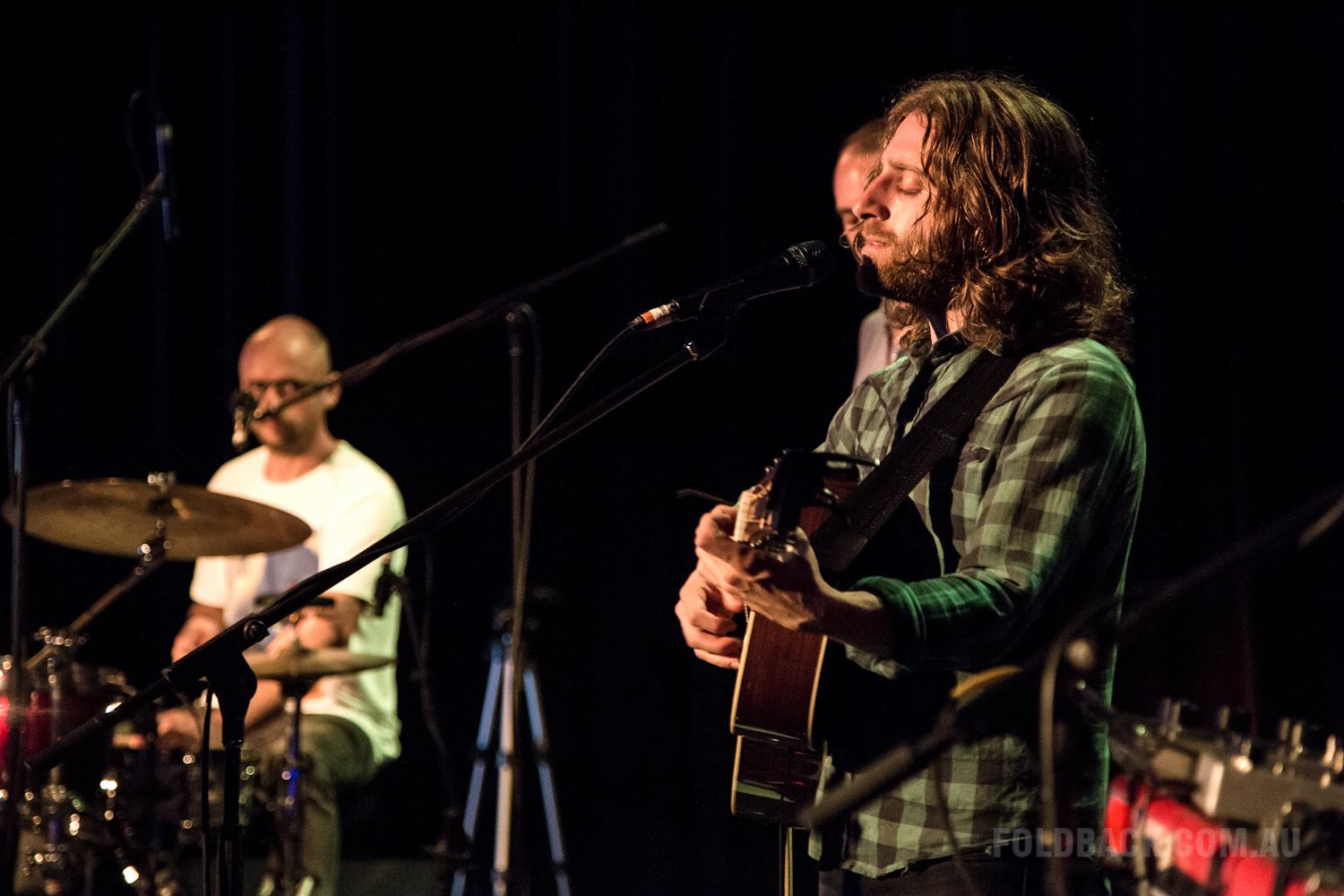 Mellow is the way of the walk.

A calming influence settled over Darwin with the arrival of Husky from Melbourne, ably supported by Darwin-based alternative maestros Green Stone Garden at the Darwin Entertainment Centre. The Studio Theatre at the DEC proved to be an engaging venue for these two superbly talented acts and the type of music they bring.

Husky (led by the titular Husky Gawenda) bring a 21st century sound to the folk/alternative genre but keep an old school feel about it – they would not be out of place playing on the same stage with Crosby Stills Nash and Young back in the day. The Husky track ‘Saint Joan’ in particular had this 1960’s-born writer smiling with sweet nostalgia. That is not to say the music is retro – it isn’t. But the arrangements and harmonies are timeless and the musicianship is sophisticated such to appeal to the traditionalist and the more youthful listener alike.

Green Stone Garden warmed up with a soulful solo piece by lead vocal Mike Meston before launching into their eclectic set of alt rock. Again, musicianship stands out as a key feature of this very professional outfit. Introspective lyrics and a calm stage presence make for a more cerebral experience with this band but that is not to say you will drift away with their pieces – there is a driving undertone of emotion with their work that keeps you slightly on the wrong foot in the best possible way – ‘The Island’ certainly captures this aspect brilliantly.

Collectively, these bands stirred the feelings of the crowd and none so much as when Husky finished with an ‘in the round’ acoustic anthem on the floor in front of the stage. With the crowd and bands (GSG joining in) merging into one in the middle of the Studio Theatre, you really could feel the love in the room – a more intimate moment at a sizeable music performance has not been witnessed before by this writer.  Ever humble, Husky Gawenda made himself available to fans after the show for a chat or a photo op, further cementing the close connection with the band’s devotees.

Thanks are due to the Darwin Entertainment Centre and staff for providing a top-class venue, facilities and service.  No doubt we will see the DEC attracting many more class performers to their Studio Theatre. A big shout out as well to James Gough of Nook Events for making it happen.

Connie B returns to the Centre with two world-renowned, award-winning singer-songwriters, Shellie Morris and Toni Childs. Connie B (Constantina Bush) is Australia’s premier Indigenous showgirl with a voice that has charmed audiences from the Sydney Opera House to Katherine, telling tales woven together with a wit that spares no one.
Inspired by Artback NT’s On the Couch with Connie B series that saw Emma Rowe as the first to ‘jump on the couch’ in September 2020, audiences will have another chance to dig deeper into the music and lives of Connie B’s guests…live and in person!
Connie B’s performance repertoire runs from Motown-style music all the way through to pop and her tunes are always accompanied by tongue-in-cheek comedy. You will never see Connie B in the same room as Kamahi Djordon King who was one of the first graduates of the Aboriginal Centre for the Performing Arts in 2000, who has since performed and toured with the Malthouse Theatre Company, ILBIJERRI Theatre Company, Finucane and Smith variety shows, and Yothu Yindi and the Treaty Project. Connie B has been performing since 2008, appearing at VIPAA Awards, Speigeltents, Darwin Festival and Sydney Festival.
Shellie Morris is poignant, knowledgeable and full of humour. Her illustrious career has balanced being one of Australia’s most celebrated singer-songwriters with her unwavering commitment to healing through music within communities. While she has been in the spotlight for many years with her involvement with Black Arm Band, Deadly Awards, ARIA nominations, Music Australia Award, NAIDOC Award, G.R. Burarrawanga Memorial Award and Australian of the Year Award, by and large, Shellie works on the ground reaffirming the identity of all those blessed to work with her.
Toni Childs – yes, that’s right – the American singer-songwriter best known for her songs ‘Don’t Walk Away’, ‘I’ve Got to Go Now’ and the Emmy-winning ‘Because You’re Beautiful’ will be adding her wisdom, warmth and music to the stage.
Your host will disarm you, encouraging you to laugh and cry with Shellie Morris and Toni Childs as you soak up their music.
Enjoy your Double Gin and Tonic!
TICKETS AND SHOW INFO
https://bit.ly/Double-Gin-Tonic

Hello all you lovely people. With a big smile, I'm here to let you know we are here to stay!

Hello all you lovely people.
With a big smile, I’m here to let you know we are here to stay!
We have all your Underground music needs sorted for your Saturday night out!
We wanted to create a space where we can come in and do what we love. And that’s playing music and making you mob dance!
We host a varied selection of DJ’s both local and international. We don’t discriminate when it comes to putting people on. But we do encourage people with the passion for DJ’ing to come in and show us their view of what is Underground, and to bring their best side of it to the people.
Smith St Social is a great venue for this, we have our roof top balcony bar for those house Sunset vibes, with an ever climbing energy and tempo into the late hours where we turn the bar into your own Darwin Underground nightclub.
There are drink specials on all night, and the food is great so we encourage you as a dancer to get down early to fuel up and catch the sunset vibes and then to party through the night!

Open Mic Jam Sessions are back. Everyone is welcome - Bards - Poets - Musicians and Speakers - bring your beat [...]

Open Mic Jam Sessions are back.
Everyone is welcome – Bards – Poets – Musicians and Speakers – bring your beat makers, horns and rattles and come get Groovy with us under the shady Banyans on a cruisy Saturday afternoon….

Tex Perkins has played a key role in Australian music! It’s understandably difficult to pull together a coherent picture of a [...]

Tex Perkins has played a key role in Australian music!
It’s understandably difficult to pull together a coherent picture of a man whose career has taken in everything from the groundbreaking experimental punktonica of Sydney mid-80s noiseniks Thug to the lilting, dark country of his recent material with the Dark Horses.
From the hard edged pub rock of the Beasts Of Bourbon’s, a snarling slice of filthy pub rock to the evocative soundscapes of The Cruel Sea, whose extraordinary 1991 single ‘This Is Not The Way Home’ placed Perkins’ world-weary growl in a new musical context and heralded the emergence of an entirely original yet archetypically Australian sound.
Then there’s the Tex, Don & Charlie albums, which saw Perkins joining forces with the legendary Don Walker, Cold Chisel’s pianist and master songwriter and son of the Clarence Valley, and Charlie Owen, previously Australia’s best kept musical secret.
Now is Tex’s exciting new (and long over due) collaboration with Matt Walker (a great artist in his own right) for duo shows. It’s a blues swamp-groove kinda thing that’s a little reminiscent of some of the things in Tex’s back catalogue. Many new originals inhabit the setlist, but see them now while they still have to flesh out the set with a few Cruel Sea covers!
“Tex has the swagger, presence and indomitable attitude that comes from years of fronting some of Australia’s most intense and spirited rock’n’roll bands. His take-no-prisoners approach to performance comes with the sensibility of an artist committed to the subtle (and often unsubtle) nuances of his craft. Throw in an astonishing voice full of power and depth, mix it with a dry and sardonic sense of humour and what emerges is the reason there is only one Tex Perkins”.
(Stuart Coupe)
PERFORMANCES:
30th January @ 8:30pm
TICKETS:
www.yourcentre.com.au/#!/events

An ongoing spoken word night at Dom’s Bar in
Nightcliff, Aralia st shops on Saturday 30th
@9pm on until late and then every Saturday night thereafter.
Free entry.
Licensed venue.
Poets,bards,hip hoppers,rappers , storytellers, comedians welcome.
Open mic for people that want to express orally.
Come on down and share your verse,freestyle or jam with language and sound..
MC’ed by barman Andrew and Noodle E.String.