The concept of FOLDBACK MEDIA NT originated from the creative aspirations of its current Chairperson Jean-Eddy Moutou, and his desire to contribute and build the capacity of the Darwin and broader Northern Territory live music scene.

FOLDBACK MEDIA NT aims to become a one-stop-shop for all your original live music needs in the Northern Territory and relies heavily on the wide-ranging skills of our team (see below). FOLDBACK MEDIA NT was developed to build the capacity of the Northern Territory’s live music scene and does this by promoting and supporting original live music artists through professional gig photography, live music video production, live-streaming, gig guides, artist interviews, music news and album reviews published on this website and on our social media platforms. A periodical ‘special edition’ print magazine of our best photographs and stories is in the works, as are special live events and mini-festivals hosted by us. We are currently media partners with the National Live Music Awards (NLMAs), Wide Open Space Festival (Alice Springs) and Mahbilil Festival (Jabiru). A particular goal we wish to achieve is better and more consistent coverage of indigenous artists in remote areas of the Northern Territory.

The name ‘FOLDBACK’ was inspired by local Darwin marketing professional and nationally-acclaimed comedian Amy Hetherington. ‘FOLDBACK’ relates to the name given to the stage amplifiers that point back towards the artists so that they can hear themselves in ‘real-time’ and avoid the sound delays experienced if only listening to the amplifiers behind them pointing towards the audience. The term ‘Foldback’ has symbolic meaning in that FOLDBACK Magazine’s publications and outputs will feed information back to the artists, the venues, music lovers, and indeed anyone looking for a great local experience.

FOLDBACK MEDIA NT continues to develop its scope and reach, currently focusing on securing grants, sponsorship and advertising to fund our activities in the Northern Territory original live music scene. As well as our web and social media publications, FOLDBACK MEDIA NT is looking to diversify into event coverage, audio-visual production and a wider range of media services, including pre-recorded and live-streamed performances in the time of COVID-19.

Logo designed by No Culture Creative 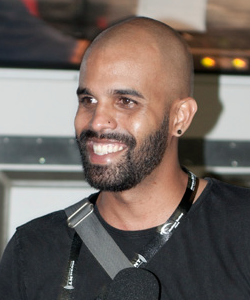 Jean-Eddy Moutou is a graphic designer and media professional who has worked for the NT News and Channel 9 Darwin as well as running his own graphic design business. He is also a percussionist, playing in local bands from time to time. His extensive experience in print, television and online media is invaluable to Foldback Magazine’s operations. Jean-Eddy is the Team Leader and effectively our creative director. He has directed, videoed, edited and produced high-quality television advertisements for local businesses (e.g. the ‘Embella Jewellery’ series of advertisements) as well as print magazines and advertisements. Jean-Eddy currently works as a Senior Graphic and Multimedia Designer for Airnorth in Darwin. 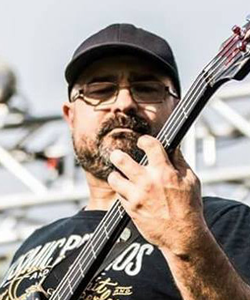 Steve is a local business owner and long-term Territorian who runs an investigation agency in Darwin that services the whole country (S.J. Kelk & Associates). He has provided investigation and risk management services for the insurance industry, legal profession and businesses in the NT and interstate for over twenty years, as well as for the Northern Territory Government. Steve has a background in the Federal Government, working in national security roles. He is also an award-winning live event photographer and a working musician in several local bands. Steve brings vast experience in corporate governance and oversight of operations and is Foldback Magazine’s Senior Writer, conducting interviews with performing artists and reviewing their albums for our website. Steve also brings a creative element with his photography skills. 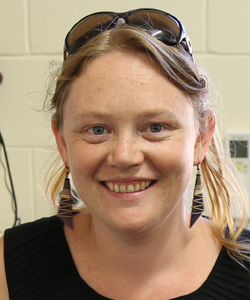 Gaia Osborne is a recent edition to the Foldback Team and brings with her a vast array of skills and experience in project management in the non-profit and community development, media and arts sectors of the NT. Gaia has worked for the last 7 years in the management of Yolngu Radio with ARDS Aboriginal Corporation. Through this role she has gained extensive experience in project design and management including financial and risk management with an excellent track record for delivering high quality outcomes in Indigenous community media and event production, managing project budgets of $10,000 to above $600,000. Gaia is now working as a freelance project consultant. This enables her to make a valuable hands-on contribution to the Foldback team through project and financial management and business development as well as utilizing her skills in community media production. Gaia is also a musician and local event producer, playing with various bands, as well as solo and mixed medium creative arts projects.

Gaia has the skills and experience in project management and HR to implement effective and efficient means of managing the grant funds, tracking progress against goals and performance indicators, undergoing strategic planning and analysis processes, coordination and support of staff and volunteers, active risk management processes, as well as project evaluation. 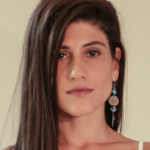 Sevan provides extensive operational support to the Foldback team. Sevan is the part-owner of Darwin’s iconic Café De La Plage at the grounds of the Darwin Surf Club at Casuarina Beach, which is also a live-music venue during the Dry Season. 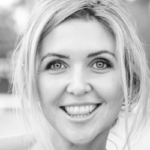 Rachel is a singer, guitarist, songwriter and photographer from the mid north coast of NSW. She moved to Darwin mid 2016 to pursue music and photography full time. Performing as Rachel Rachel, 2017 saw her become a finalist in the NT Song of the Year Awards, win a peer-polled competition to play on the Bass in the Grass Festival line-up, perform as a guest artist with Thundamentals, on the line-up for Shore Club, open for the Pierce Brothers and most recently Diesel and invited to the Maldives to perform for Christmas Eve and New Years Eve. She has just finished recording her debut EP with renowned producer Stuart Stuart, due for release in the next few months. She has been pursuing her other passion of photography in the form of documentary projects, live music photography and the occasional wedding. She is looking to take this to the next level in 2018.

Jo Shearn Treasurer
Jo joined Foldback in late 2019 and has been Treasurer since May 2020. She also writes the weekly newsletters and keeps on top of the gig guide. Jo is a great supporter of the live music scene in Darwin, her day job is arts administrator and on the weekends you might find her behind the bar at the Happy Yess or the Darwin Railway Club.