Multi-instrumentalist and Aboriginal activist singer-songwriter Scott Darlow dropped in on Foldback Magazine to tell us about his incredible musical journey from his Salvation Army family upbringing, to mentoring young people around the world and his debut solo album ‘Sorry’.

Scott Darlow has been on the Australian live music scene for many years now, with the genesis of his career forming from a childhood filled with the brass bands of his Salvation Army officer parents’ life. From those early steps with the cornet, trumpet and guitar and later the didgeridoo, the now 33 year-old has made several albums under his various band formations and now comes out with his debut solo effort, ‘Sorry’. This album of originals also contains an exceptional interpretation of the classic ‘Solid Rock’ (Goanna) in which Darlow collaborated with the song’s writer and Goanna front-man Shane Howard, who sang on the track with Darlow as a duet. Darlow’s version of ‘Solid Rock’ became the most played rock song on Australian radio in February 2016.

There is more to Scott Darlow however than being just a talented artist, as will be seen. But first a bit of history…

Scott Darlow, a Yorta Yorta man, wrote the title track to his debut solo album ‘Sorry’ many years ago during the political strife surrounding the parliamentary debate on the national apology to the Stolen Generation. He wrote it mostly for his family and his own cathartic experience and never expected that it would end up on an album. That it became the title track on his debut solo effort some twelve or so years later speaks for the poignancy of the issue that still remains today.

“All the people were up in arms about the Prime Minister saying ‘sorry’ to the Stolen Generation (which Prime Minister Kevin Rudd eventually said in 2008) and those people didn’t understand that it’s not about them taking responsibility, or about compensation…it’s actually just about empathy. If that happened in my family, if that happened to me and my mum and my grandmother I would be spewing. So that lyric is quite literal, you know like when somebody dies, you say ‘I’m sorry for your loss’. I’m sorry for the tears down through the years and for the respect you haven’t had. It’s as simple as that. I have always played it live but this is the first time I have had the courage to pitch it – with a song like that, there is an element in Australia, you sort of worry about the backlash you are going to get for something so political. But the beauty of turning 30 is that you don’t give a fuck any more.”

Scott Darlow grew up mostly in Victoria (also in Perth and Hong Kong) to parents who were both Salvation Army officers and was exposed to the music of the Salvation Army bands from an early age. He started playing the cornet at age five and eventually graduated onto trumpet, saxophone, clarinet and trombone, as well as classical guitar. It was not long before he was playing in bands as a teenager. 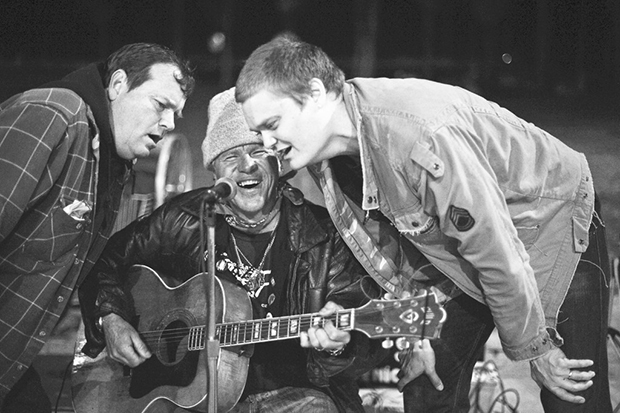 Although playing live music from early on, he doesn’t recall an exact moment when he knew that being a live music artist would be his ultimate life path – rather, circumstances later conspired to push him that direction. Says Darlow of his early career choices:

“I wasn’t very flash at school. I had a bet with a mate that I wouldn’t finish high school but I did pass and I got just enough to get into a teaching degree. And I only did teaching because my old man said I had to get a job or I had to go to uni.”

Being a teacher that was able to play musical instruments of course led to him being placed in the music curriculum, even though he trained in English and History. He also played covers in pubs and wrote his own material but it was the tragic passing of his influential father that galvanized his decision to make music his full-time pursuit. Darlow recalls:

“I thought I’d have a crack at teaching because you get good holidays and I had a go at that for a couple of years but then a lot of stuff happened – dad died. He started off as this amazing Salvation Army officer who ran refugee camps and changed thousands of lives but he had a breakdown in his 40’s and he died at 57 of alcoholism. I remember being at his funeral and my daughter had just been born and I’d only just gotten married and I stood there just really thinking ‘well what’s this all about?’ And I’d being playing some shows and had written some songs and started making a record and I thought ‘why don’t I just do this? I’m not going to waste one more day because I don’t know how many I got so I might as well just do this.’

But along with his passion for music came a passion for education – and as a teacher and as a musician, Scott realised that he had a perfect segue to get to young people and talk to them about the other things he was passionate about – Aboriginal culture and reconciliation, amongst other broader social issues. Working with World Vision, Scott has delivered talks and performances to hundreds of thousands of young people around the globe over the last ten years and mentors young Indigenous people in Australia to connect them to culture, to help give them pride and self-respect and to develop leadership skills. Of this work, Scott says:

“As an educator I realised I had an opportunity to go into schools and talk about things I’m passionate about and music was just a really good vehicle that you can stand in front of two hundred year nine boys, fifteen year old boys who are a really tough room, but you’ve got a guitar and a didgeridoo and all of a sudden they will listen to you.”

“Deadset, half of those kids have never seen live music”

Darlow also lamented how times have changed: “These days I go to a school and deadset, half of those kids have never seen live music. As a kid I would want to go and see a band on the weekends but these days they have Youtube, X-Factor and such. It’s on their phones, they can look at it whenever they want.” Scott believes that seeing live music is a spiritual experience that cannot be outdone by a small screen on a device. “Going in and providing that experience to teenagers and then talking about things that you think are really important, like Indigenous issues, I found that it is a very effective way to inspire empathy amongst teenagers and that’s what brings about change.”

So Scott Darlow is a busy man. 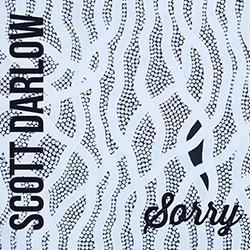 The album ‘Sorry’ is a formidable mixture of pop and country, hard rock and ballad that is hard to pigeon-hole. Darlow’s medium-pitched voice is the perfect vehicle that moves effortlessly between the musical modes on this album and anchors the work as his own amongst the stylistically-ambiguous tunes. It is that variance, that flexibility in style that makes this album particularly interesting and cements Darlow as an artist that is anything but a one-trick-pony. Lyrically, the songs on this album range from entreating apology to the sweetest of love-songs; from the political to the whimsical. There is a broad appeal here.

The title track ‘Sorry’ is a song of great magnitude in both structure and message. One could posture that it has been released all too late on a political level however the message is just as relevant today, the pain is still there and recognition and reconciliation is still incomplete. There is still a long way to go and Darlow is perfectly positioned and able to keep the conversation going. This track has the potential to be an anthem for the times, past and present.

“When you go and sing someone’s else’s song, you risk messing with people’s memories”

Scott’s treatment of Goanna’s ‘Solid Rock’ is masterful. Equally masterful was his decision to reach out to the original songwriter and singer (Shane Howard) to lend his voice to the track in a duet with Darlow. He was initially fretful that he was taking on such a mammoth and historical track and the risks inherent with doing so. Says Darlow:

“Without trying to sound corny, music is the soundtrack of your life. When you go and sing someone’s else’s song, that is such an iconic song, you potentially risk messing with people’s memories. (On the other hand) you don’t want to make it exactly the same as the way it was originally sung so you have to do it differently but at the same time still paying respects to the original. So it’s a fine line. I was so aware of that and that was part of the reason I asked Shane to be involved in it because I was thinking ‘well I’ve got the bloke who wrote it and sang it’ so I can’t stray too far and mess with people’s memories of it”. Having given his blessing for the treatment, Howard also agreed to sing on the track, perhaps giving Darlow the ultimate endorsement.

A standout track is the first on the album – ‘Down Like Flies’. Starting out with a Church-esque layered guitar riff, it soon morphs into a catchy major chord pop number underscored by the bass line and lyrics of a song much deeper than it sounds at first listen – again, Darlow shows his musical ambiguity to great effect in creating something that is not quite what it seems but is much, much more. It is a song that explores an alternate reality – a ‘what-if-things-had-been-different’ scenario, a sort of ‘there, but for the grace of God, go I’ examination of self and our impact on others.

Scott Darlow has called in his many years of songwriting, performing and championing the cause of Indigenous Australians and put it all into a splendidly dexterous and amorphous work for these times. With ‘Sorry’, Darlow keeps one eye on the past and one eye firmly set on a better future.

Scott Darlow will be headling the Yurora Festival in Sydney on January 8th 2017 Tickets Here: http://yurora.com/program/