Australia’s biggest celebration of First Nations music, The National Indigenous Music Awards celebrated a massive year in Australian music tonight under the stars at Darwin’s iconic Amphitheatre with Gurrumul and Baker Boy walking away as the night’s big winners.

Gurrumul was honoured as Artist of the Year while his posthumous masterpiece ‘Djarimirri (Child of The Rainbow)’ picked up Album of the Year and its title track was crowned Song of the Year, completing the trifecta of the night’s key awards. 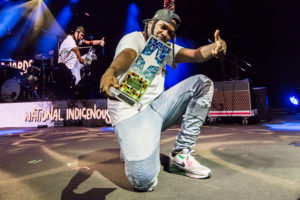 Flying the flag for the new guard, Darwin’s Baker Boy was the night’s other big winner, taking home Video of the Year for his mainstream crossover hit ‘Marryuna’ and Best New Talent presented by Spotify. Baker Boy closed the night with massive guest appearance from Yirrimal (who earlier impressed along with his band previewing his upcoming single), bringing the crowd to their feet in a celebration of the future of Indigenous music.

The night also featured performances from triple j Unearthed winner Alice Skye, Kasey Chambers and Alan Pigram, Busby Marou, Stiff Gins and a rousing show from Hall of Fame inductee Roger Knox. Following tonight’s ceremony, the Australian Music Vault in Melbourne will be creating a special display acknowledging Roger Knox as the Hall of Fame recipient that will include awards, artwork, rare photographs and performance footage, posters and precious mementoes from Roger’s own personal collection that reflect his journey as a musician and community advocate.

The late T. E. Lewis was also acknowledged with a heartfelt presentation from Skinnyfish Music’s Michael Hohnen, honouring his important contribution to the Australian music community.

The crowd were also on their feet for an amazing a performance by the Kenbi Dancers who shared the NT Traditional Music Award with Buku-waṯthunawuy Nininynu Rom. The Central Australian Aboriginal Women’s Choir proved to the crowd why they are being talked about around the country and were honoured with the night’s Special Achievement Award.

Community clip of the year was awarded to B-Town Warriors from Bourke, NSW.

2018 has seen one of the strongest years yet for Indigenous music with number 1 albums, national tours, TV (and Eurovision!) appearances, Hottest 100 placements and acts playing festivals across the country. The NIMAs was not only a great concert and celebration of success, but also carried forward the air of community between artists and the public with a real feeling that First Nations music is no longer a genre, it’s a creative force in the global music industry that will continue to grow in the year ahead through to 2019’s National Indigenous Awards.

ARTIST OF THE YEAR:
Gurrumul

ALBUM OF THE YEAR:
Gurrumul – Djarimirri (Child of The Rainbow)

SONG OF THE YEAR:
Gurrumul – Djarimirri (Child of The Rainbow)

PERFORMING AT THE 2018 NATIONAL INDIGENOUS MUSIC AWARDS WERE:

Additional photos available on on our Facebook page with appropriate credits.