‘Saltwater’ Indigenous music legend Stephen Pigram from the Western Australian coastal pearling town of Broome spoke to Foldback Magazine about how his sound developed, his artistic career and his upcoming solo performance at this year’s Darwin Festival.

We hear talk about the ‘Saltwater’ sound of your music – can you tell us what this is and how it developed?

We stumble with this. People like to put labels on things (laughter).

That’s why we asked!

I started playing in cover bands from sixteen years of age and as time went on I started getting together with some of the local solo artists like Jimmy Chi, who is famous for writing Bran Nu Dae (a musical set in Broome touching on Indigenous issues) and a few other things but always the sound around Broome was this kind of hybrid of island songs, you know because of the pearling industry. It always had ukuleles and mandolins and all string instruments together and lots of harmonies. When we finally formed the Pigram Brothers with all my siblings in 1996, we’d been a kind of rockier band before that called Scrap Metal, more electric and stuff. We felt like we were coming round full circle by forming a brothers’ band and using our voices and harmony and playing lots of stringed instruments. For want of a better description we said to ourselves “we hunt and fish off the saltwater every day” and the sound and the lyric is influenced by that. It’s not quite country, something different.

A similar musical style came out of the Torres Strait, what with the islands and the pearling industry there too.

We had a big Torres Strait Islander population in Broome too, coming across for pearling in the 1950’s. We’ve always had that connection with Seaman Dan (Henry Gibson ‘Seaman’ Dan, internationally renowned musician from the Torres Strait). He’s probably the only other artist in Australia that covered our songs (laughs). So that’s a great compliment in a way and that he must have a connection with the sound we were creating and the lyric, you know? I think it’s a great thing.

I think just about everyone north of the Tropic of Capricorn can identify with that sound, being on the ocean and that sort of thing.

Talking about Bran Nu Dae and your involvement in it as musical director – I saw that production at a playhouse in Parramatta in 1991, with Ernie Dingo in the lead role.

I went to that performance in Parramatta but I had just stepped down as Musical Director for the tour. But I did the one in Brisbane before that one and the original production in Perth. I had to step off it because I was starting to tour with the band Scrap Metal, they were sort of running parallel.

It’s a play that certainly stuck out in my mind and then when the movie came out not too long ago.

It’s a brilliant production. After that, in 1993 we actually traveled all around Australia through the country towns, in South Australia, the back of New South Wales, even right up to Cairns. It was a ground-breaking musical play. Some of my songs are in it. Jimmy Chi, Mick Manolis, all the guys that wrote the songs for it, back in 1981 we went off to a music school in Adelaide called the Centre for Aboriginal Studies In Music. We basically all threw in our jobs (laughter) and hit the road as young fellas. We just wanted to play original music. When you talk about the Saltwater Sound, Jimmy’s a part of that too, and Mick Manolis because they were the first ones to really have a shot at that kind of island-calypso type of stuff and Pigram Brothers followed on from it later on.

You certainly started something and it’s a style that still has a great attraction to many people, especially up here. But you are coming up to Darwin solo. The Pigram Brothers as a band, is that still a thing?

Yeah we’re still performing, in fact we’re doing a show here tomorrow night in Broome but we probably play four or five times a year, when we can get to a particular festival. It’s obviously a big project to get seven people on the road. 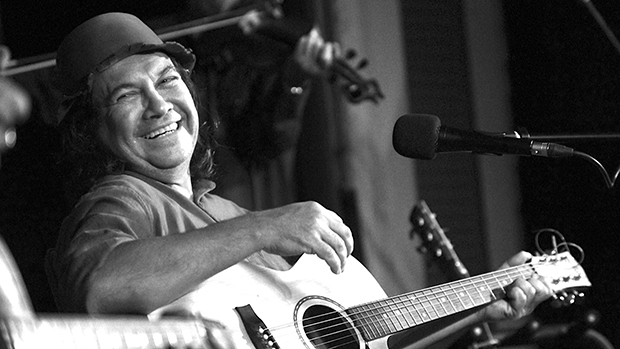 I always wanted to do the solo thing because of older artists that used the finger-picking style I like to call folk and country blues. That’s a sound from the Broome area too. That sits in with the Saltwater Sound.

Broome is a very multicultural place. You never know the background of anyone you see walking down the road. It’s quite a melting pot.

Very similar to early Darwin too. In fact a lot of our uncles would travel up there to play music. We have family connections there and our connection here, with the pearling. You had people come out for the pearling, I got a grandfather came out from Manila back in 1890 and married into the local Aboriginal families and they would have brought a lot of their musical influences with them. Like the string bands in Darwin in the 1930’s. It’s a great musical history we try and keep going.

You know they promote Broome as a tourist place, multicultural place but I am trying to get more and more people to recognise that the music is really representative of that rather than just the cooking or the multicultural makeup of someone’s face. It’s a great way to tell history – through music.

What can we expect from you at The Lighthouse this year at the Darwin Festival?

Well a lot of my solo stuff. A lot of the early Pigram Brothers’ stuff and stuff from Bran Nu Dae and even Scrap Metal songs I can perform them solo because that is kinda the way they were written anyway. A lot of the time I would bring the song to the band, whatever band it was and it would develop from there.

Is it all nostalgia or are there some new things coming out as well?

It’s an hour and a half show. I do all my new stuff, my solo record stuff. I’m trying to bring a sort of picture show, some images that hint at the stories behind the songs rather than do a five minute spiel of what each one is all about.

Let your music do the talking?

Yeah but I’ll do it for a couple of the songs because they need to be explained, some weird lyrics in there (laughs). I’ll have a nine string, a twelve string with the bass octaves taken off and a six-string ukulele, a great little instrument. And I got the harmonica and a six string for finger-picking and a bit of a stomp box too just to drive some of the more energetic songs. 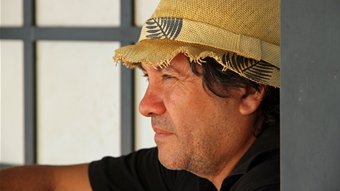 You’ve got a very distinctive voice too – gravelly is the word that has been used to describe it.

I don’t smoke cigarettes but I think it’s from playing in smoky pubs (laughs).

Stephen Pigram is performing for the Darwin Festival at The Lighthouse on Wednesday 17 August 2016 – for bookings see: http://www.darwinfestival.org.au/