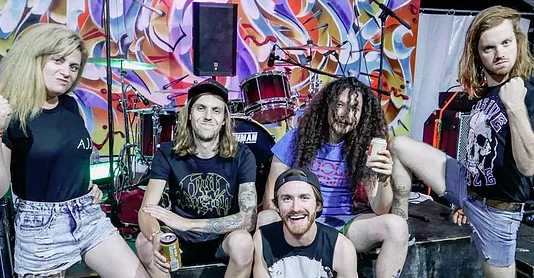 We have to say we were pleasantly surprised when we started to listen to Clowns new release ‘Lucid Again’ (Poison City Records) – by the musicianship firstly, the raw power secondly and lastly by the way it transported one back in time to the sharpness of the early punk and alternative scene of the late 70’s and early 80’s. Whether by accident or by design, Clowns have channelled the rawness of that era but with a technical musical proficiency that mostly eluded such bands of that time. Cross that over with a mix of clean and hardcore vocal styles and a meld of psychedelia and fuzz-punk riffing – what we have here is a unique Australian band producing very unique works. Clearly Clowns could care less about sticking to the punk script with this work and their eclectic, genre-hopping approach has boldly produced a killer album that will have broad appeal across the usual demarcation lines of alternative Australian music.

‘Lucid Again’ is acknowledged by the band as a departure from their previous two albums, ‘I’m Not Right’ (2013) and ‘Bad Blood’ (2015).  There is less of the ‘short-fast-loud’ approach of the band’s previous works and more emphasis, we feel, on structure and artistry. Says drummer Jake:

“We’re all very passionate about what we do and I think with this record in particular we really took the time to make sure that everything was as good as it could be. Whatever we put out, there will always be some form of progression, change and new elements to it. To consistently release things that people are going to like, you have to take risks, shoot for new sounds and stuff. With this album, we threw ourselves in the deep end and chucked in a lot of things that actually we didn’t really know how it would go down. We wanted the songs to be a bit longer than the ones in our previous records and also went down a spiral of guitar effects. It unintentionally became a psych record.”

As usual, the band is tight and production is first-class. The album was recorded (as was the band’s previous releases) at Hothouse Audio at St Kilda, Melbourne (Craig Harnath) where a ‘who’s who’ of bands over many years have recorded through the same desk, including AC/DC and Midnight Oil. The studio features world-class equipment and a range of vintage instruments and effects for bands to utilise during their sessions. Of this, Jake says: 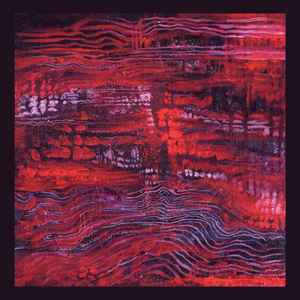 “(Craig) is a bit of a hoarder of amazing vintage instruments. We had upwards of fifty guitars at our disposal and like really amazing vintage amps and stuff like that so on a gear level we very much had everything at our fingertips. That studio as well has a Neve desk that a lot of really classic Australian records were recorded through. Having all that gear at our disposal helped us a lot and knowing what was there from our previous times in the studio, we were pretty sure what we were going to use this time.”

The band’s current single from the album, ‘Pickle’, is a heavy hitter straight off the bat, with a memorable main guitar riff and lots of scuzzy, phaser stuff in the middle after a breakdown that is reminiscent of the early Hawkwind space-rock classics such as ‘Damnation Alley’. Shouty vocals give this track its emotional lungs when describing a downward spiral. The video for this single is the sort of thing you would stay up all night for to watch on Rage – cleverly simplistic and somewhat disturbing, the optics for this track underscore the song’s tone of self-medicated self-loathing.

‘Noise In The Night’ comes right out of the blocks at you with a barrage of ripping bass and is perhaps a bit more traditionally punk in style, with half sung-half spoken dialogue and self-talk. Lyrically, imagine a hyper-caffeinated Talking Heads. The prolonged ‘Not Coping’ moves from a traditional four-chorder into a beast of a breakdown, with channel-hopping glitched guitar bounding from ear to ear underscored by a steady rhythmic bass line. It morphs into a tension-building epic phaser attack that will make you feel like you have been caught in a riptide – just go with it until it deposits you back on shore as the track reaches its conclusion. The title tack ‘Lucid Again’ creeps up slowly and menacingly on you, dripping with paranoia and existential angst before exploding into a screeching climactic guitar solo. This track will bend you in ways you never thought possible.

With some new members (and with it, some new vocal options) the band is looking forward to their upcoming national tour, having toured extensively overseas in recent times. With ‘Lucid Again’, Clowns have got a quality product to tour with. Every track hits the spot and with so much touring already under their belt, no doubt the live performance will be every bit as good as this album.

Clowns are performing at the Darwin Railway Club (Support by Acid City) on Saturday June 3 2017 – get your tickets here: https://www.clownsband.com/tickets