Colin Lillie sat down with Foldback Magazine in Alice Springs just prior to jetting off to the land of his birth, Scotland, to talk frankly about his difficult past, his redemption, musical journey and the launch of his first album, Glass Homes.

Colin met me at the reception of my hotel as arranged, politely keeping me updated on his estimated time of arrival as he had to attend a school function for one of his children and had to push our interview back a little. This of itself might not seem particularly interesting but, when you put it into perspective with the Colin Lillie of old, it is a quantum leap from alcoholic, addict and brawler to loving partner and step-father; a regained self-respect and respect for others that had been lost in a haze of booze, drugs and homelessness.

Redemption is a clear theme in the outstanding and moving Glass Homes release. I had an immediate sense of déjà vu upon my first listen, hearing a crankier, more imploring Cat Stevens with a resonant Scottish bass voice, especially on the second track ‘Renegade’ – a beautifully arranged song with powerful lyrics sung powerfully, it is an ‘up yours’ to those who would rein him in, spiritually and otherwise: “I ain’t running, I’m the bringer of change.”

Colin is as engaging as he is humble. This is not an affected modesty – listening to him talk, there is a quiet confidence and almost subliminal charisma that comes, I think, from someone truly grateful at a second go at life and from the knowledge that he has stared down the Devil and settled with him on his own terms. He has paid the bill and now he is free to be himself, disencumbered from the chains of perversity and imbued with a genuineness and honesty that is a strength rather than a liability. The catharsis for him that comes from baring his soul in this album in such a public manner cannot be overstated.

Devoid of his demons (but with full knowledge that they still nip at his heels), Colin can finally be the artist he always knew he could be. Sober for eight years, the 42 year old Alice Springs-based artist is a late starter in music. From the award-winning track ‘Give Thanks’ – “Now I know I can be what I want and I don’t care how long it will take me” – he doesn’t care how long it takes, and he knows that every day above ground from now on is a good day. 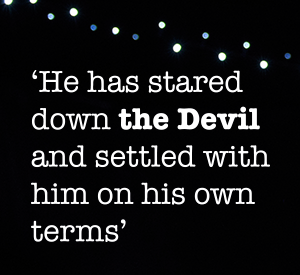 The redemption theme is purposefully self-indulgent but for a valid reason. This is part of his healing journey and emergence from the ashes, Phoenix-like, from a life he could have lived better. Says Colin: “I made an album. This one is about me. The next one might be about someone or something else.” He has gotten it off his chest and faced his fears. His travails over his life serve as his muse, for now at least. His maturity has given him a clearer insight to what is and what isn’t important and, having made this wonderful album and cleared the slate, he is ready to explore other directions.

The third track on this debut album – ‘Damn You’ – again speaks of others moralizing and judging him on their terms. Colin will have none of that: “Who are you to save me? Have your morals set you free?” he asks in his mesmerizing deep Scottish brogue, throwing it right back at them. Judge not, lest ye yourself be judged. We are all equally damned in any event. He might have softened, but he is by no means soft.

Which brings me to that voice. It is as demanding of your attention and as instantly recognizable as any renowned artist from any decade in the modern era you might care to name and I trust we have not heard the last of it. It can be both menacing and comforting at the same time, a warning to some and a soothing balm for his own soul. Colin’s intention with this album was to project that massive voice to bring the listener in to his message, rather than to have his lyrics lost in the stew of over-production. He has succeeded in this regard. Having said that, the range of musical expression that Colin and his cohorts provide on this album is wide, with dirty bass under some tracks providing a rawness that sits perfectly in juxtaposition with some delicate guitar work and even some brass, as in ‘Brother’. Subtle keys in ‘Within’ soon give way to a pulsing rhythm, layered perfectly. The voice battles (and wins) for supremacy with the instruments in the very personal ‘The Man’, which includes an effective rhythm change towards the end, building tension for a slow release at its conclusion. The music is clever, the lyrics thought-provoking.

As indicated, there is a softer side to Colin Lillie that he explores in this album and he takes us on a journey from his self-loathing past in ‘Bloody Knuckles’ (featuring Leanne Tennant on vocals as the feminine voice that can see through the layers to the good man beneath) through to ‘She’ – redemption through love, the feminine yin softening his masculine yang and the realisation that hate just drags you down.

Colin artfully spins the dark threads of his past with the hopefulness he has created for himself through his sobriety and the love of a woman he now shares his life with. He admits however that reconnecting with family overseas is still a task ahead of him. On the last track ‘Will You’, he questions how he will be viewed and if he will be forgiven when his time draws to an end. It is not a plaintive cry but done quietly, perhaps in fear of the answer he might receive. This is a subtly powerful and moving song that would leave anyone with children hoping they never have to ask the same question – but ask it Colin must. Lets hope he gets the answer he is looking for.

The titular track ‘Glass Homes’ is Colin’s way of saying, to himself, others and the world generally, that we are doomed to repeat our mistakes for want of a will to stop, listen and change if necessary: “Flags fly and flags burn…and we all fall”. Colin has changed and, through his music, is a testament to the rest of us that it is never too late to be who you want to be – to continue to repeat the mistakes of the past is silly, just like throwing stones in glass homes.

Musically, Colin says of himself that he is a singer who plays guitar, and not a guitarist who sings. To that end, he has spent considerable energy in mastering the instrument and insists that he owes it to his audience to rehearse, rehearse, rehearse so that he may give the best of himself to them. Colin performed at the Music NT 20th Birthday celebration recently at the Darwin Railway Club and certainly gave the best of himself with a standout solo set that got the crowd’s attention. This NT Song of the Year (Blues & Roots) award-winning artist has regained his soul through his music and is intent on doing his music the justice it so richly deserves. His skillful songwriting demands his best efforts at the sharp end.

All tracks on this album are noteworthy in their own way. The production values in this debut are seriously good, thanks to producer Mark Myers (Big Sister Studio, Cairns) who also lent himself to multiple instrumental accompaniments on the finished product. Bonding together, he and Colin have produced a remarkable debut album that we hope receives the national and international attention it deserves.

Colin is playing some dates in Scotland and then embarking soon on a national tour.