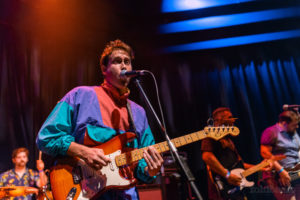 Stuart Park legends At the Dakota got the grooves and moves out at the Darwin Entertainment Center on December 8 with the launch of their new single ‘Disco‘.

An outstanding performance from local singer-songwriter Rachel Rachel (accompanied by Tor Trethowan on drums), opened the evening, starting with some soothing acoustic tracks and transitioning to a more electronic medium later in the set, a taste of the material she is planning to release in the near future.

Ben Evolent also supported with a full band bringing his anthemic songs to life, ushering a warm energy into the room while it quietly filled for the main event. There is something about Ben’s forceful blues-folk raspy style that seems to gel with At The Dakota’s upbeat indie-pop meanderings, and it is always a good sign when both acts are on the card.

At The Dakota have reached a point now where they are transitioning from being local live music legends to being something that really should be tipping south and nationally – time to polish that rough diamond, guys

At The Dakota, true to form, brought their usual high energy pop offerings that never fail to bring people to the front of stage. They are serious musicians that do not appear to be such and that is the basis of their charm. They perform much as the early Skyhooks and Split Enz did, minus the costumes (although I wouldn’t put that past them for the future) – zany rock done solidly, and with depth if you care to really listen.

At The Dakota have reached a point now where they are transitioning from being local live music legends to being something that really should be tipping south and nationally – time to polish that rough diamond, guys. ATD frontman Dylan Podsiadly channels Graeme ‘Shirley’ Strachan without even knowing it, and that kills the older pundits amongst us. We have told him though – take the hint already and run with that shit – you guys have a ready-made audience of Gen Xers as well as that of your own generation, if you can only get your stuff out further. Wide appeal is, well, appealing.

The evening was also supported by Coopers, with the offering of VIP treatment with their ‘Loading Zone’ exclusive bar and VIP experience for the more ‘discerning’ punter.

Our snapper Connor Askham was on hand to capture the evening’s frolics – take a meander amongst his handiwork via our photo gallery below: