Foldback Magazine had their intrepid photojournalist Connor Askham on the ground at St Jerome’s Laneway Festival in Melbourne this year – here is his take on this auspicious annual live music event.

On a glorious summer day in 2017, St Jeromes Laneway Festival brought a vibrant display of Australian and international talent to Melbourne. Now in its 12th year running, the festival has expanded nationally and into our neighbouring countries, staying true to its name and filling laneways across Australia as well as Singapore and Auckland. Originating in the cramped but beautiful Caledonian Lane in Melbourne’s CBD, they have well and truly taken over the Footscray Community Arts Centre and surrounding streets and lanes that take you down to the scenic Maribyrnong River. 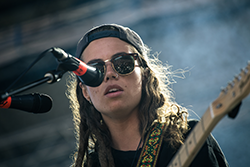 Laneway Festival dished-up a decent serving of artists on its lineup who were prominent enough to get a spot in this year’s Triple J Hottest 100 – Glass Animals with a whopping 3 songs in the countdown, Tash Sultana, A.B. Original and Dune Rats with 2 songs each and King Gizzard and the Lizard Wizard, Luca Brasi, Camp Cope andGang of Youths each getting one place on the list. It is telling that this festival continues to attract talent of this calibre. 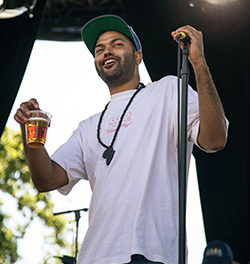 I started my day watching and taking photos of Koi Child, an upcoming Jazz-Rap collective from Fremantle, who dropped a standout self-titled debut album in 2016 produced by none other than Kevin Parker of Tame Impala (who also performed at this year’s festival). This 7-piece act fronted by Shannon ‘Cruz’ Patterson has wisdom and talent pouring out from every crevice. If you want something refreshing and different, catch them wherever you can.

From the Dean Turner Stage where I’d seen Koi Child it is a decent sized walk to the Very West Stage, which played host to some of the larger acts of the day. In between these two stages, the festival had two more smaller stages which fit nicely amongst food stalls and bars cascading up the banks of the river. The atmosphere was calm with a nice breeze flowing, giving some relief to the harsh summer sun.  As the crowds slowly made their way into the event I decided to get a move along in order to not miss some favourites. 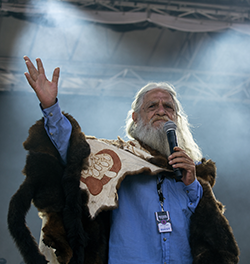 After a comforting welcome to country from a local Indigenous Elder, the Melbourne-based, self-taught singer-songwriter Tash Sultana appeared on the Very West Stage to soothe the audience. This artist has absolutely no boundaries when it comes to creating innovative music.  She 100% utilises her natural ability to pick up a variety of  instruments in her live shows, laying down guitar and drum loops then moving to a keyboard and mandolin to add extra elements, all while allowing her vocal melodies to shine through. I have also never seen someone play a wind flute whilst simultaneously beat boxing. No wonder this exemplary artist landed a #3 and #32 on the Hottest 100 countdown.

I opted to stay at the Very West Stage to catch those party maniacs the Dune Rats take to the stage. This 3-piece (what do they call their genre? Dunecore stoner pop?) is making some serious waves around Australia and has just dropped a new album titled ‘The Kids will know it’s Bullshit’. 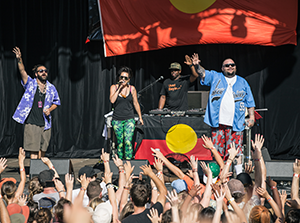 After my dose of dunecore I decided it was time to get a bit more hip-hop in me with A.B. Original over on the Spinning Top Stage. This duo consisting of rappers Briggs andTrials has been on high rotation in my music library recently after they dropped a huge debut record late 2016 titled ‘Reclaim Australia‘, a politically charged album delivered in a tasteful manner which was translated live by these powerful artists exceptionally well. A.B. Original also brought some Darwin talent on stage with the inimitable Caiti Baker, who features on two tracks on ‘Reclaim Australia’ and provided the hooks for many of their songs during their performance. They couldn’t have chosen a more perfect fit. 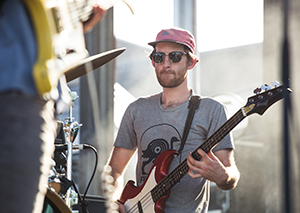 King Gizzard and the Lizard Wizard

As the crowds built through the late afternoon into early evening, it got quite difficult to navigate from stage to stage quickly. So I swiftly moved along to catch the magical weirdness of King Gizzard and the Lizard Wizard, who busted out their handmade microtonal instruments in their true psychedelic rock fashion. It will be hard to miss this band on your musical radar as they plan to unleash 4 albums this year.

Californian musician Tycho gave a euphoric performance as the sun slowly set over Melbourne, calming the audience with his full-band ambient post-rock/electro instrumentals, while Nick Murphy (aka Chet Faker) delivered a well-rounded and delightful set full of his most memorable songs and a couple of new tracks he’s created under his new moniker. 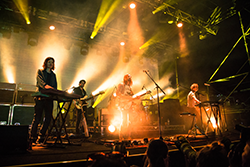 Tame Impala, a stand-out for me personally, was always going to be a crowd pleaser. They did not disappoint, with a crowd that lined up for hundreds of metres, all eager to catch a glimpse of what might be the band’s last tour for a long time as lead singer/songwriter Kevin Parker decides to take his personal career in new directions. This was my first time seeing Tame Impala and I hope it isn’t the last.  Opening with ‘Nangs‘, we were straight away thrown into an all-out psychedelic musical journey. By the time the drop in ‘Let It Happen‘ hit, the confetti was in the air and the dance moves were busting-out. The live performance Tame Impala delivered was strikingly colourful and radiant to say the least, with a monolith of a projector displaying a wall of stimulating graphics across the stage which was a perfect fit for the kings of modern psychedelic rock.

I left the festival in an elevated mood, refreshed in the knowledge that I had witnessed a truly unique musical experience that will stay with me for a long time. I will be making the trek down south this time next year without doubt. With its quirky setting and eclectic lineup, the festival gives a collective sense of belonging to something greater than oneself, almost a secret shared between artists and punters that creates a oneness that is rare in today’s live music landscape. Such is the hallmark of a great festival.

Foldback Magazine wishes to thank the organisers of St Jerome’s Laneway Festival Melbourne for the opportunity to cover the event for Northern Territory readers.