Independent singer/songwriter Caiti Baker is excited to unveil the video for her new single, ‘Make Your Own Mistakes’. An eclectic mix of soul, pop, jazz and swing, her vocals are sung with attitude over fat double bass, trad-meetshiphop drums, one of her father’s crunchy guitar samples, a killer horn section and an enthralling clarinet feature!

The track is a follow up to Caiti’s debut solo single, ‘Heavy On My Heart’, which featured on playlists all over the country in the second half of 2016. Describing the song, Caiti says, “Sometimes being taught a lesson isn’t nearly as effective as making your own mistakes in life. I’ve learnt a lot from being in the drivers’ seat and messing up. Everything gets easier when you’re honest with yourself. “Make Your Own Mistakes” is about that and how I don’t need to be judged or told what to do if someone else thinks I’m going about it the wrong way. That’s my mistake to make, my lesson to learn. Traditional Jazz and Big Band were a part of my upbringing and it makes me happy to have those musical memories reborn via the creativity of my two producers Michael Hohnen and James Mangohig, as well as the gifted horn arranger Eugene Ball.”

The video clip for ‘Make Your Own Mistakes’ is a collaboration with the Sutardy Brothers (Adam and Jordan Sutardy), inspired by late night talk shows and variety shows. Caiti wanted a fun clip “on set” where she could incorporate her three favourite things – performing, dancing and comedy!

Describing the video, she says, “I was lucky to pull this shoot together with a bunch of friends and all round legends. I love dance, and watching dancers do their thing. It’s a big part of who I am and it’s reflected in the music I make. To give a bit of context to different dance styles in one clip, I thought it’d be cool to invite my funny mates to “judge” the nonexistent dance comp that we’re all so familiar with on variety shows. So I have Nazeem Hussain, Geraldine Hickey and Harley Breen providing that comic aspect to the visual and song. And you can’t have a “Late Night Show” without a host and the obvious answer to that is Briggs!”

‘Make Your Own Mistakes’ – written by Caiti Baker, and produced by Michael Hohnen and James Mangohig with horn arrangement by Eugene Ball.

Mixed by Dan Elleson and mastered by Fred Kevorkian.

‘Make Your Own Mistakes’ out now on Perambulator Records/MGM 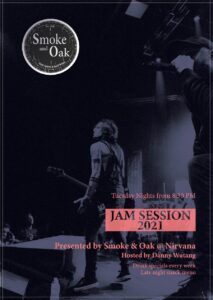 Sounds@Mindil is back with free, family-friendly gigs! Enjoy everything that Mindil Beach Sunset Markets has to offer while you relax to some awesome tunes by young Darwin musicians and bands.

BYO picnic rug and join us for an evening of amazing entertainment!

⠀⠀⠀⠀⠀⠀⠀⠀⠀
Join us for an evening of spectacular young talent from multiple Darwin young artists and bands, at the last Mindil Beach Sunset Market

Get excited for the October Bootlegs! Bootlegs at the Bat is an opportunity for emerging local talent to perform a short [...]

Get excited for the October Bootlegs!
Bootlegs at the Bat is an opportunity for emerging local talent to perform a short set in front of a supportive audience. The evening is rounded off by several seasoned feature acts.
Come and show your stuff, or grab a delicious Lucky Bat pizza and enjoy the show! It’s an evening of diverse entertainment in a cosy venue.
Music-poetry-comedy-story telling-dance-variety
Here are our open mic performers:
Russell Smith (performance art)
Amy Vinicombe (singer/song-writer)
Pixie Keenan (singer/song-writer)
Camp Dog/JP (singer/song-writer)
Leah Potter and friends (comedy/acoustic originals)
I’m also stoked to announce that this month’s feature artists are:
LADYQ (circus/variety) and
ANDREW MCLENNAN (poetry/story-telling)
See the event posts for more info.
See you there!

Join us for our late night opening! Whether yo show up for a cathartic dance or to catch up with some good humans, our Opening Night [...]

Join us for our late night opening! Whether yo show up for a cathartic dance or to catch up with some good humans, our Opening Night Party promises to keep you entertained into the evening.

Electric Storm is back after 2020’s massive sold out event and we need you to rise from your grave, conjure up your crew, summon up your ghastly costumes and enter [...]

Electric Storm is back after 2020’s massive sold out event and we need you to rise from your grave, conjure up your crew, summon up your ghastly costumes and enter if you dare to celebrate the scariest night of the year – Halloween, with the biggest Halloween dress up party in the Southern Hemisphere!

Vibin Events present Lil Mase 100 Alice Springs 2021
We are excited to bring Lil Mase for his 1st time ever to perform at The Gap View Hotel on October 30th, 2021.
It will be a highly entertaining night with live performances of all his New & Previous bangers along with all the crowd favourites from “Shine like the sunshine”, “What it gon be” & “1hunnid”.
The event will have local support acts TBA providing the best of Hip-Hop/RnB & more.
Don’t miss out on Alice Springs’s Biggest Hip-Hop/RnB LIVE Party BASH, with one of Australia’s most promising talents.
V.I.Ps will sell out early and are limited so get your tickets early to avoid missing out.

TUTUP MULUT will be guiding the audience through an audio visual experience, from the helm of their sonic [...]

TUTUP MULUT is an Australian/Balinese Multi Instrumentalist and Producer from Darwin, whose music bridges the gaps between genres and cultures.

SNACKBOXX is giving you a DJ gig without the D SNACKBOXX wana give you a treat this Fringe Festival. Lady Laksa, Molly Dolly and KlitKat will take you across all genres [...]

SNACKBOXX is giving you a DJ gig without the D

SNACKBOXX wana give you a treat this Fringe Festival. Lady Laksa, Molly Dolly and KlitKat will take you across all genres and include from the depths of classic metal and punk to disco, pop, hip hop, soul and funk. Molly Dolly will bring you an in-depth knowledge of music and booty shaking that won’t quit. Molly is ready to spoon feed you a serve of heavy rock and punk and finish you off with a funky after taste.

Wash away the funk with KlitKat, a vinyl collector turned DJ. KlitKat’s chilled cocktail will double dip between souled up disco and old school RnB and hip hop.

Get sipping, ready for Darwin’s spiciest DJ, Lady Laksa. After playing around town and getting dancefloors heaving, she is ready to give you a taste of everything from 90s pop, early 00s r&b and your favourite pop and hip-hop bangas. Get ready to sweat to all your favourite guilty secrets.

SNACKBOXX is a collective of local Darwin performers who are carving out space in the the DJ scene to bring more women and non-binary DJs behind the decks.
With a focus on old school funk, soul, hip hop and metal, punk and alternative music, SNACKBOXX has something tasty for everyone.

SEASIDE SESSIONS IS BACK FOR 2021! With the success of our live music launch last year, we have decided to get [...]

SEASIDE SESSIONS IS BACK FOR 2021!
With the success of our live music launch last year, we have decided to get the ball rolling again for the coming year!
Live music kicks off every Sunday and for those three hours you can get any two cocktails for $20.
There will be different artists playing every Sunday! Keep an eye out on our socials to find out who is playing each week!

MusicNT is excited to be bringing Saltwater Divas back to The Darwin Fringe in 2021! Saltwater Divas began in 2013, seeking to develop and nurture emerging Indigenous female singer/songwriters in [...]

MusicNT is excited to be bringing Saltwater Divas back to The Darwin Fringe in 2021! Saltwater Divas began in 2013, seeking to develop and nurture emerging Indigenous female singer/songwriters in The Top End. Led by inspiring mentors, this series of workshops is designed to expand knowledge of music and the industry while also growing confidence as performers.

The culmination of the program is this showcase performance at The Darwin Fringe. Don’t miss the chance to catch these truly amazing artists on the next step of their journey as performers.

Come on a mezmerising journey witnessing two artists create from stone and sound. Sculptor, Ioanna transforms raw stone into a spectacular sculpture as music producer Gaia creates the sounds to inspire and amplify the experience. Witness this unique creative process unfolding before your eyes.
Performance 7.15pm – 9.30pm.
This performance is featuring in the Darwin Fringe 2.0 Spooky Artist Party.