I first met Aaron and Levi Vanderaa some years ago when I took my son to their home studio where Aaron was giving my son guitar lessons. The house was a two-story affair directly across the road from Charles Darwin University Casuarina campus and I recall being met at the front door by the lads’ mother.  I knew as soon as I met her that this was no ordinary suburban household and that inside, something was brewing, something was being nurtured by this woman – something chill, artistic and outside the 9 to 5, workaday-come-home-and-watch-reality-television suburban lifestyle that a casual observer passing by such a house might guess of its occupants.

Aaron had another student who was just finishing up his lesson so we had to wait a short while. We were led through the downstairs area towards the studio, passing a large table covered with bundles of multi-coloured and textured cloth and leather. As I later learned, some of this material would be made into glorious stage outfits for the boys by their mum as they started on their musical journey that would take them around the country.

After a few minutes the studio door opened and a 30-something man in military fatigues walked out carrying a guitar case. I recall thinking at the time that he looked so out of place in his issue camouflage uniform, in this space that resonated art and music – perhaps the very antithesis of war. Upon entering, I noticed the carefully set up mattresses against walls, microphone stands, amplifiers and guitars of all manner of styles, along with computers and audio production equipment – all this would have been a dream come true to any aspiring young musician or producer and certainly I admit feeling a little jealous, albeit in a good way. It also made me comfortable to know that my boy was being taught by people who had passion and obvious know-how, even though they were barely out of their teens themselves.  Somehow, their young age made me even more confident in their abilities. They were doing this because they wanted to and they had a plan to make music and tour, not because they had a mortgage to pay.

After introductions, Aaron got down to business with written exercises he had my lad doing over the last few weeks. Aaron had studied a Bachelor of Creative Arts and Industries right across the road from his home/studio, starting at the age of 16 and graduating at 19. This was a lifestyle, not just a hobby. I soon found myself jamming on a classical guitar with Aaron and my boy while Levi fiddled with some piece of equipment in the background. While I can hold my own in a jam, I am not sure whether it was my son getting the lesson or myself. There was no sense of ‘teacher-student’ aloofness or arrogance in this room – it seemed to me that Aaron, a young man of obvious talent, was keen to impart his knowledge no matter who or what age his student may be.

I had got a little background from my lad on the Vanderaa brothers before I had met them.  I knew that they had a music project called Enth Degree and that they were gearing up to go on the road soon. This of course is now historical fact and the boys came back to town in early November as their other manifestation, VanderAa.

Aaron explained the differences between the two musical entities:

“Enth Degree is still a thing but has been put on the back burner as VanderAa has taken off. We release all our electronic and experimental-style music under Enth Degree. We created VanderAa to give life and a separate entity to the music we make using organic instruments – organic being anything not made digitally from a computer”

Leaving Darwin for southern climes has obviously agreed with the brothers, who have since racked up an impressive musical resume, from busking in the streets of outback towns to sharing stages with some of the biggest acts at the biggest festivals in the country. Names such as Sticky Fingers (damn!), Florence and the Machine, Xavier Rudd, Boy and Bear and this year’s ARIA dominators Tame Impala have all occupied the same space as these two Top End musicians and budding impresarios. Since beginning VanderAa in 2014, they have chalked up over 300 shows across the nation and have learned both their stagecraft and the management aspects of the trade in the process. Basing themselves in Newcastle NSW has allowed them easy access to other major centres, although it seems the big city/touring lifestyle has not knocked the NT out them – they had a lot of friends in the audience at the Rails gig welcoming them home and they seemed genuinely glad to be here.

Aaron speaks of VanderAa as being the brothers’ ‘organic music’ project. You don’t get much more organic than didgeridoos. At the Rails gig, Aaron opened with a stirring didgeridoo solo before he and his brother Levi, front and centre on a standing drum kit and stomp box for a kick, commenced a night of high-energy antics accompanied by their accomplished bassist Travis Corey Grace. As a three-piece, they sounded like some extra members were hiding under the unusually-tall Rails stage, with full, rich and earthy-sounds interspersed with funky guitar riffs, rocking bass lines and busker-style percussion.  These guys would be at home as much at a folk festival as they would a Newcastle workers’ pub or the main stage at Splendour.  Always impressive is a drummer who can sing and Levi did not disappoint, taking the lion’s share of the vocals, resplendent in his barramundi-skin jeans – one of the 40 or so outfits produced by the VanderAa matriarch. Aaron looked more than comfortable on guitar and, not being constrained by a drum kit, animated the proceedings with obvious glee.

Stylistically, VanderAa have thoughtful lyrics over earthy and deep melodies (there is that ‘organic’ theme again – it seems to apply not only to their instruments but also the music those instruments produce in their capable hands).  A case in point is their single ‘Letting Go’ – a relationship-themed montage of clever chord progressions with breakdowns that express emotions better than I can write about them. Levi shows his range in this track from some low and soulful imploring, up to falsetto overlays. Another track, ‘Breaking Hearts’, a more traditional but no less effective ballad, is a mood-settler and juxtaposes the otherwise energetic musical prism that is VanderAa.

The duo’s last official single release was ‘Sun lovers Street’, a reggae-infused feel-good track inspired by youth, surf and sun, hopeful for the future while at the same time living in the moment.  Watching the video for this number, this middle-aged writer is sorely reminded of the adage that ‘youth is wasted on the young’ – again, a little pang of good-natured jealousy reared its balding head.

Watch out for these performers in the near future – it seems they are winding up to do big things and they are being smart about it and in no rush. I get the impression that for these young men, music is not a means to an end, nor is it an end in itself, but a long continuum – a journey with the rudder set firmly to follow the sun.

*VanderAa are releasing their debut EP in April 2016 so keep an eye out for that.

Don’t forget to check out Foldback’s live music video of VanderAa taken at the Darwin Railway Club on 6th November. Our photograph gallery of the show is also available to view on our Facebook page.

Desert Festival is set to return this September to celebrate the best of local arts and desert culture in Alice Springs/Mparntwe.

Desert Festival is set to return this September to celebrate the best of local arts and desert culture in Alice Springs/Mparntwe.
Over ten balmy days and nights, our vibrant desert community will gather for the twentieth year of Desert Festival and relish in all things music, theatre, film and art, created right here in our own backyard.
The festival will open in conjunction with the Alice Springs Town Council Night Markets on Thursday September 24 and conclude with celebrations for the twentieth anniversary on Sunday October 4.
Desert Festival, presented by Red Hot Arts Central Australia, will proudly deliver an all-Territory program in 2020 featuring a diverse range of local talent providing daily pop-up performances and a night-time program that will have a broad activation of venues and theatres across town.
In keeping with tradition, this year’s festival branding showcases the 2019 Advocate Art Award Desert Festival Prize winning piece ‘Phoenix Interrupted’ by Rick Lausberg.
Desert Festival has been made possible with the generous support of the Northern Territory Government and Alice Springs Town Council. 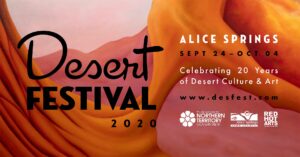