Central Australian songwriter, Catherine Satour, is releasing the lead single from her upcoming self-titled EP. For Catherine Satour, music is in her blood, having played her first gig at 9 years old with her father Bunna Lawrie and his legendary band Coloured Stone. An Arrernte and Mirning woman living in Alice Springs, through her music Catherine shares experiences of life, love and place through songs that fuse rock and soul. 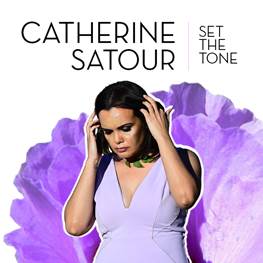 Set the Tone is about self-love and respect. It is about knowing one’s self and one’s boundaries. As a Southern Arrernte / Mirning woman Catherine has experienced abuse, racism, sexism, double standards and set-backs, but these experiences don’t define who she is, Catherine sets her own tone. Set the Tone presents in a sensual style, symbolising the story telling of a self-respecting woman.

The wild desert rose is featured on the artwork for Set The Tone. This flower’s beauty and presence blooms vividly in the harsh environment of the desert. This reflects Catherine’s ability to stand lovingly in her beauty as a woman amid all of her experiences.

Catherine devotes a lot of her time and energy to developing local talent in Central Australia. She travels to remote communities facilitating music and performance workshops with local schools and youth organisations. She also mentors young local artists through the Desert Divas project. This project led to the release in October 2012 of Central Australia’s first compilation album of Indigenous female artists – Desert Divas; Volume 1.

Catherine performed original material with the Darwin Symphony Orchestra in ‘Songs From Big Sky Country’, a feature event for the 2011 Alice Desert Festival and she was nominated in 2012 for a National Indigenous Music Award.

Catherine Satour is also known for her role as TV presenter on the NITV arts and culture programs ‘Around the Traps’ and ‘Our Songs’.

The single ‘Set The Tone’ is available digitally via