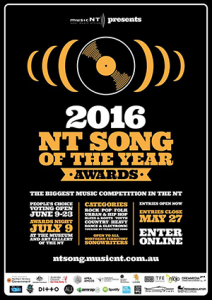 40 songs have been chosen from a record-breaking 450 entries as the finalists in the 2016 NT Song of the Year Awards. More than 50 Australian music industry leaders were involved in the judging process to identify the top songs from Australia’s most isolated music scene.

Four finalists have been selected in 10 categories including Rock, Pop, Folk, Blues & Roots, Dance/Electronic, Urban/Hip Hop, Country, Heavy, TourismNT Territory Song and Youth. The top 40 songs showcase the diversity and quality of the NT music community and finalists come from all corners of the Territory including Alice Springs, Darwin, Katherine, Elliott, Yirrkala, Ngukurr, Nhulunbuy and Milingimbi.

MusicNT Executive Director Mark Smith said the number of entries was unexpected, but a great reflection of the vibrant Territory music scene. “We were completely blown away with 450 entries, it’s 150 more than last year and just goes to show the strength of the NT music scene. The quality of the finalists this year shows Territory songwriters are not letting the isolation of our scene hold them back and we can’t wait to announce the winners.  We’d like to thank everyone for submitting their music and also thank the judges who had the unenviable task of whitling down from 450 to 40!”

The NT Song of the Year winners will be revealed at the awards night on Saturday, July 9, 2016. A special night featuring performances from 2015 NT Song People’s Choice winners At The Dakota, Australiana singer Melanie Gray, fresh electronic act Destrait and another special NT act (to be announced soon).

Along with the category winners and the Overall NT Song of the Year there will also be a People’s Choice revealed on July 9. This Award is decided by the public and last year over 1000 people cast their vote. Voting is open now and closes on Monday June 28 at 5:00pm (ACST).

THE 2016 NT SONG OF THE YEAR AWARD FINALISTS!

In the meantime, mark Saturday July 9 in your calendar as the official NT Song of the Year Awards night. Held under the stars at the Museum and Art Gallery of the NT, it’s a truly spectacular night of NT music celebration. Tickets will open to general public in late June.

This year’s Awards will be hosted by triple J’s Dom Alessio and feature performances from past winners and this year’s finalists.

Good luck everyone with songs in the competition… the standard is incredibly high this year… excitement is brimming for you all.