I had the pleasure of seeing and photographing Apakatjah (Dion Forrester and Jonathan Lindsay-Tjapaltjarri Hermawan) live at Wide Open Space Festival in 2016 when they played as a duo and I was swept away with the power of their performance then. Described to me at the time by an industry insider as ‘strong men’ in their community, this was certainly apparent by the charisma, confidence and humble power of both men as they made the wide stage their own. Combining both traditional and contemporary sounds and textures to their music and lyrics, I can say I was immersed in the country that I was standing in even more so simply by listening to and watching them (the desert WOSFest in Central Australia has way of doing that to you anyway but this was something deeper).  I have met both men since and that humility is also present away from the stage.

I have seen nothing as uplifting in live music as watching good indigenous musicians performing on their own lands, connecting to country and to their people – the connection radiates from them. Aptly, Apakatjah (Luritja kriol describing a mixed-race person – not quite black, not quite white, somewhere ‘in between’, as are the artists themselves) are able to bridge the gap between cultures and bring an audience of all types together and make them feel part of something bigger than themselves. Apakatjah may be ‘in between’, but they are not apart. Rather, they are akin to a fuse in a cross-current circuit, their subtle energy flowing freely in each direction. 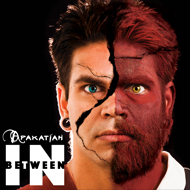 Intricate acoustic guitar work and strong vocals are a hallmark of Apakatjah. Add to this a full band sound and you get to a different space altogether. Their debut album ‘In Between’ blasts out of this space with a musical depth that is inspiring. Jonathan and Dion have worked hard on their music and the addition of a full band sound is next level stuff for them.  The original intention was to record an acoustic album however this soon changed. Says Dion:

Dave Crowe’s (Resin Moon) fingerprints are all over this album. A talented Alice Springs-based producer and award-winning artist in his own right (NT Song of the Year 2016 for ‘Salt’), he has done immense justice to the production of this album, recorded at the CAAMA Music Studios, Alice Springs. Dave and I have spoken in the past of the heavy influence the desert environment of Central Australia plays in influencing both his and other local artist’s music and this seems apparent in ‘In Between’. The album, in parts, has a certain ‘desert’ feel to it, with Spanish guitar riffs and horns reminiscent of a Sergio Leone movie invoking the high plains of New Mexico before the turn of the last century – this is done to great dramatic effect on tracks such as ‘Down The Road’, ‘Desert Man’ and the short-burst flamenco-esque filler, ‘Mexican’, a fret-board run invoking also a bit of acoustic Jimmy Page. 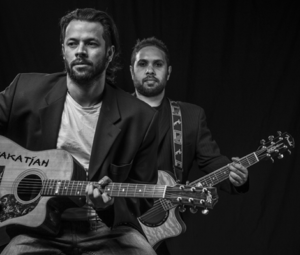 Track by track, there is a great variance of style, which is indicative of the songwriting and musical talent of Apakatjah – from the above-mentioned Spanish guitar influences to more traditional rock sounds and a slowing of pace on the plaintive ‘What Did I Do.”

The up-tempo ‘Waru’, with traditional language and English, again intones the ‘High Plains Drifter’ feel with some great horn work and arpeggiated acoustic guitar and mixes the cultural sounds in a wonderfully counter-intuitive way. ‘Desert Highway’ has that rhythmic rolling feel of a ‘road-song’ that one would expect with that title and is all about that bass to carry it down that long outback track.  Similarly, ‘Down The Road’ pulses along on its bass, with some ethereal backing vocals that perfectly prescribe the emotional turmoil of the subject matter – that of being lied to by a loved one. Tracks in language such as ‘Irriti Nyinapayi’ and ‘Ngurra’ take traditional song and instruments and stick them in a cultural blender to produce some very danceable music. ‘Desert Man’, a song of grief and loss and also of hope for Indigenous people, builds and releases tension with soulful strings and subtle vocal overlays.

The title track and single release ‘In Between’ is a pleasantly surprising departure from the musical theme, being in western-swing style with what sounds like a double bass pumping out firsts and fifths. Lyrically, the title says it all as the chorus implores “What about me? What colour do you see in a world that sees just black and white?”

‘In Between’ is a diverse album that grabs on and doesn’t let go, compelling the listener to play through to the last note. I would be happy if it were just an acoustic album but the decision to make it a full band production was inspired and has produced a work that should endure and propel these artists along that desert road to a much wider audience. That they are also supporting Midnight Oil on those legends’ national tour when they play Alice Springs speaks for itself and should get Apakatjah the recognition they deserve as a unique and talented Territory act, representative of the culture and diversity of the Centralian landscape and its people.