Young Darwin heavy rockers Shapeshifta had a recent hiatus due to some line-up issues but the band is now back on track with new drummer Luke Kohler taking on the timekeeping duties for this very talented group of teen musicians. The band features Manolis Kamitsis and Jordan Sabaratnam both on guitar and vocal duties, bass player/vocalist Kieran Pearce and now the versatile Kohler (Gaia). This line-up is experienced beyond their years, having collectively many live gigs under their belts under various formations.

If the last Shapeshifta performance Foldback covered is anything to go by, their comeback gig should not disappoint. Very tight and natural performers, you can expect a high-energy show with precision musicianship from these lads. We know them to be committed to their craft and to their vision of having a red-hot crack at making an impact in the music industry. They are already looking beyond Darwin and plan to tour sometime in 2018.

You can also expect to hear an evolution in the sound of Shapeshifta at this gig, with much of their soon-to-be released material on the set list. Says Kamitsis:

“(Our older stuff), say it’s like a baseline. We’ve taken that sound and developed it a bit. We’ve got some songs that are more melodic, more open-chords and then we’ve got a couple of new songs that are really thrashy and intricate. So it’s all come together by going off that original sound.” 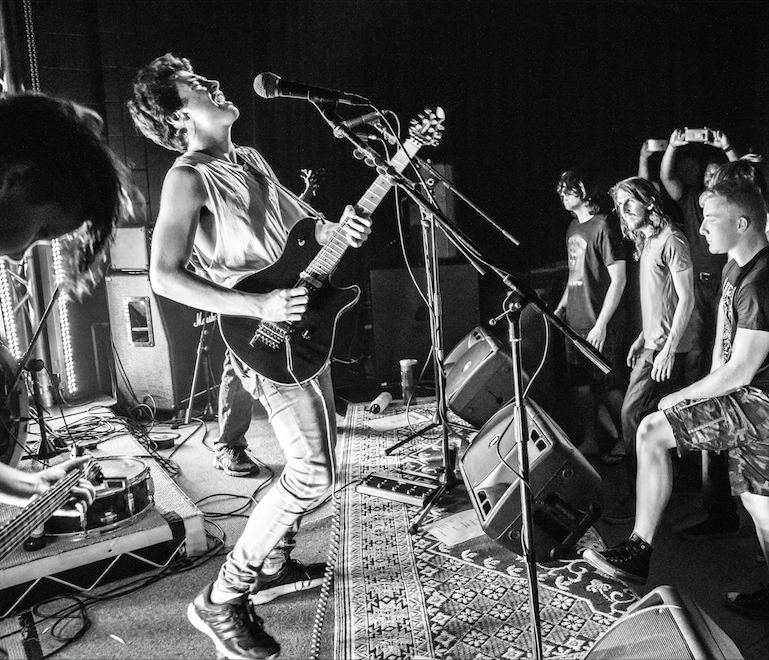 All three up the front lend their voices to the songs, either collectively or individually, with lead vocal duties alternating as needed – this can be seen as true mark of professionalism across the young lineup and lends variety both to the sound and to the performance. And perform they do – their shows are as much about stage energy and crowd interaction as they are about musicianship. It is heartening to see young musicians so comfortable in their own skin on stage. Part of that performance is a bangin’ lighting rig that will make for an even better visual spectacle – they have invested much in the theatrics of their performance but are restrained enough not to turn their performance into a pantomime and detract from their musical cred.

Shapeshifta started as a high school project in 2014 and has gone through a few lineup changes since. Kamitsis in particular is invested in recording and production as well as performance and has mixed and mastered for other band’s offerings (the boys confirmed that there will be something new of their own out later this year). Of getting into the production side of things and going down that path, Kamitsis says:

“I got caught in the rabbit hole straight up. It started with me just wanting to record my demos and I wanted to record my guitar so it sounded like a proper record. I’d listen to my demos and then listen to other songs and say ‘why doesn’t my stuff sound like that?’. Three or four years later, that is what I’m doing.”

Now with better gear and a home studio built from a cyclone shelter and playing in pub bands on weekends, Kamitsis has beat out his own path into making music a full time career. Pearce has a little more schoolwork to do before he can make his career choices later in the year but it is clear that they and the rest of the band are on a path that will hopefully see them all being on the scene for a very long time.

You can catch Shapeshifta’s comeback gig at the Happy Yess in Darwin this Saturday, June 17 with support from We Burn Bridges, Kayoss and 17Zer01. Doors 9.00pm; tickets $10.00 at the door. 18+