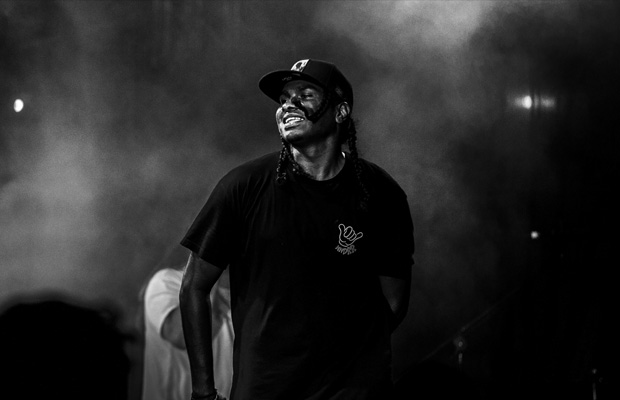 “Word about town… is that I’m the word about town”, Danzal Baker, aka Baker Boy, announced. And then set to work proving why. The sold out show in the middle of festival park lit up from the first notes of the powerful opener, Black Magic. The energy from Baker Boy and his crew is relentless with positivity and good intentions shining through. His songs are commercially friendly and catchy as all hell. Listening to him rap in his native Yolngu Matha language is absolutely captivating.

Cloud 9, last year’s massive hit that kickstarted his career, was stellar. Mr La Di Da Di, his current hit that just took out NT Song of the Year’s top honour, complete with mesmerising synchronised dance routine, was definitely a crowd favourite. His remix of Treaty is something very special, and the passion that seeped through his words was tangible. The friendship within the crew is obvious, and it was lovely to watch how willing Baker Boy was to share the spotlight with his talented friends. Dallas Woods who features on Black Magic and Kian Brownfield, the 16 year old who has just been announced as a JJJ Unearthed finalist and also co-wrote and featured on Cloud 9, proving they are rising stars in their own rights. From cameos of local artists and family, to dance showcases including an 8 year old breakdancer, to a battle between the very skilful DJ Mixa and drummer Ben Clark, this show had it all. Fresh from a tour in Europe, watching Baker Boy perform back in his home state, surrounded by his incredibly proud friends and family was very, very special.

He finished the night with Marryuna, the JJJ favourite, which catapulted to #17 in last year’s JJJ Hottest 100. The song is an absolute stand out and was further enhanced by Baker Boy’s yidaki (didgeridoo) playing and a huge dance circle that filled The Lighthouse. Before he said goodbye he pulled his young sister onto the stage and it was a very fitting end to such a love-filled night.

It is hard to believe that this is his first headline tour and he is yet to release his debut album. The Fresh Prince of Arnhem Land is set to take over the world. Hip hop is in very good hands.