Fresh off her national tour promoting her debut album ‘Love Monster‘ and her EP ‘Night Thinker‘ breakthrough single ‘Adore‘, Gold Coast singer-songwriter Amy Shark will be hitting Darwin late October as part of her regional tour around Australia. Foldback Magazine’s Steve Kelk caught up with Amy for a chat about her love of her fan base in regional Australia, her ‘overnight’ worldwide success and what drives her to keep making music.

I have been fortunate to be able to photograph Amy Shark’s live performances from the pit a number of times now, and the thing that always strikes me about her is her utter command of the stage and her confidence in front of a crowd. That is something that does not come overnight, although Amy seems to get tagged with that ‘overnight success’ label a lot. Amy has toured the world and appeared to rapturous applause on The Late Late Show with James Corden, one of the USA’s top-rating late night television shows, and came seemingly out of nowhere to take the world by storm. 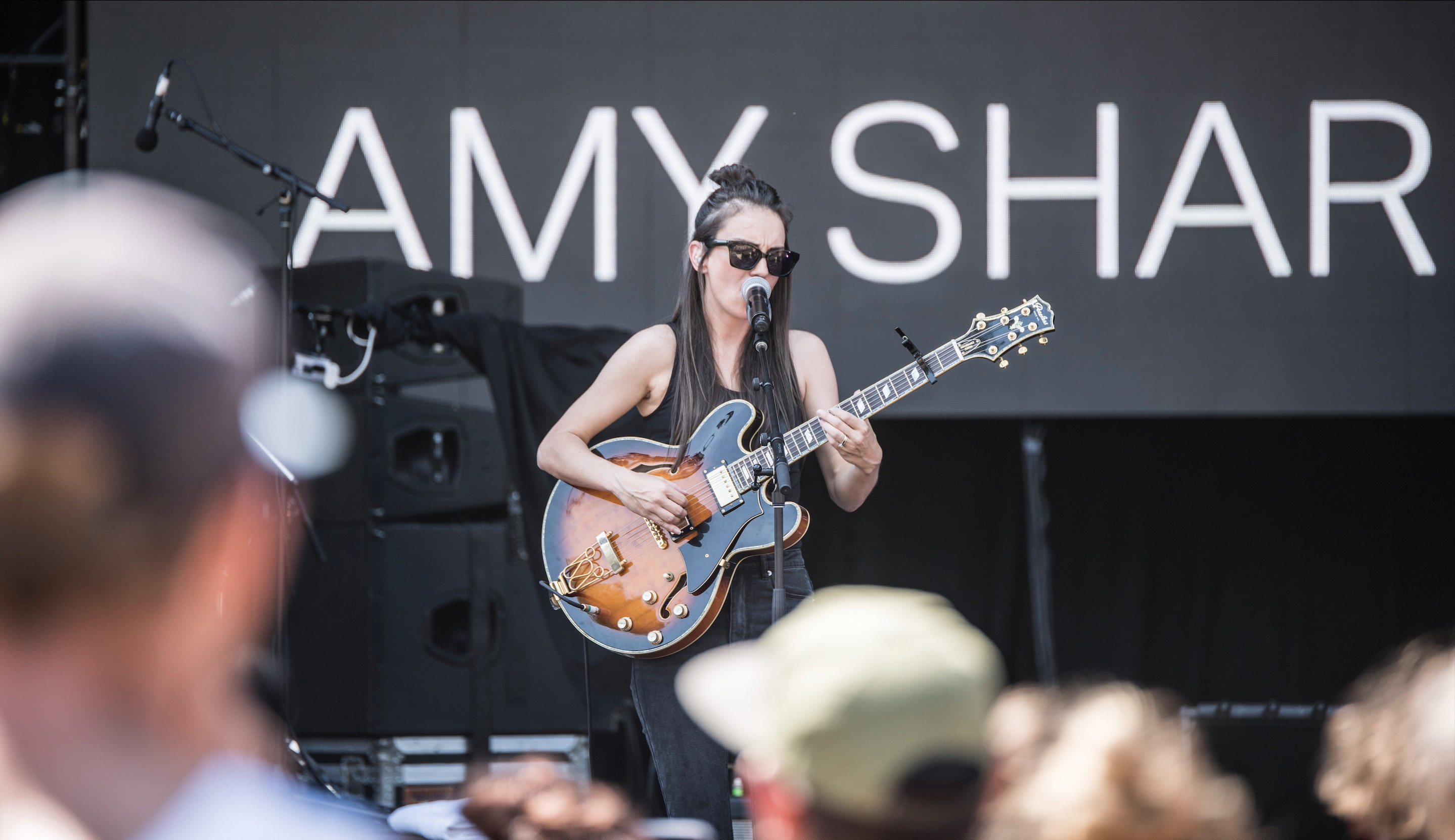 But not everything is as it seems. Amy is famously quoted as saying “Sometimes it takes fifteen years to be an overnight success” – fifteen years of hard slog, honing her craft at venues on the Gold Coast and up against the detractors along the way, these same detractors providing inspiration for her anthem-like track ‘I Said Hi‘ (‘I bet the whole world thought that I would give up’, she sings with barely-contained disdain for said critics). Says Amy: 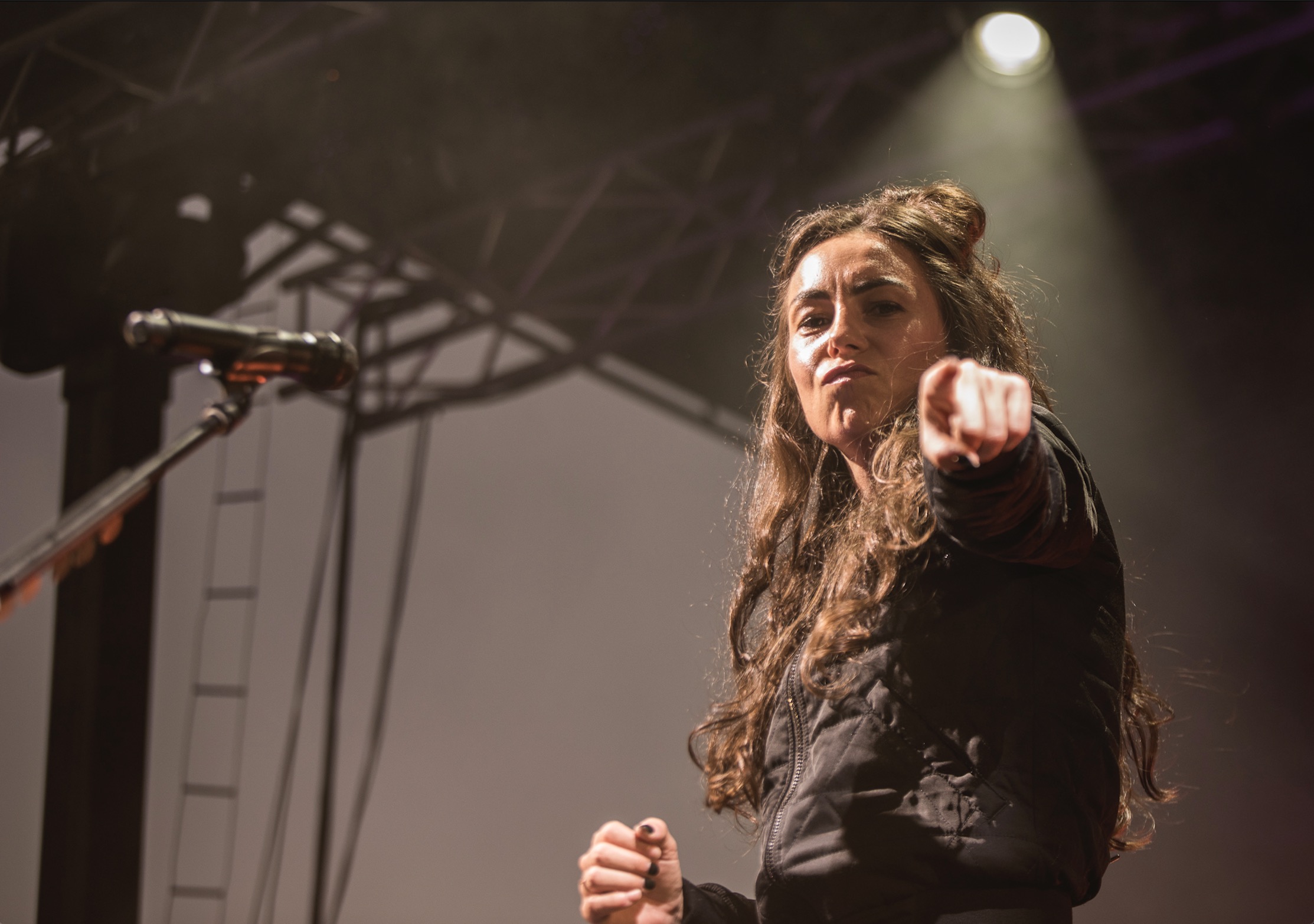 “If you were not from the Gold Coast I guess it would look like I was an overnight success. I take those comments with a little grain of salt because I understand if you weren’t from my home town and saw me sort of hustling here, you wouldn’t know my name. I think all in all its probably always for the best because the longer you are in training, the more you are going to be ready for the battle, you know. The second you try to get some attention, it’s like all the wheels are in motion and you gotta be ready. You gotta be ready to record and jump straight into it because those opportunities come around all the time, so I guess I was just so ready for it because I had all those years training for it.”

“There are some people that I will always remember that were really quite nasty actually, not giving me any support or the time of day. Yeah so it’s definitely a middle finger up and I still really enjoy playing it”

“It was just another day where subconsciously I just came out with the melody and these words and the more that came out, oh okay this is what it’s going to be about. It’s the best feeling because I’m kinda working myself out like, what am I trying to say, what’s buried in there, obviously I still had some bitterness and some issues about some years that I thought were lost that I could have really capitalised on. I’m upbeat now and it’s fine and everything happens for the right reasons. There are some people that I will always remember that were really quite nasty actually, not giving me any support or the time of day. Yeah so it’s definitely a middle finger up and I still really enjoy playing it.”

Perhaps success really is the best revenge. Amy now has that confidence after all those years in training, and with her recent successes catapulting her to international acclaim. ‘Amy Shark’ (real name Amy Louise Billings) is a character of sorts, the game-face she puts on to give her live performances, to give a voice to her lyrics and beats. She is still the same person on and off stage, but on-stage requires a different attitude; a putting on of a different hat, which she literally achieves with her familiar top-knot hairstyle when she performs – she explains: 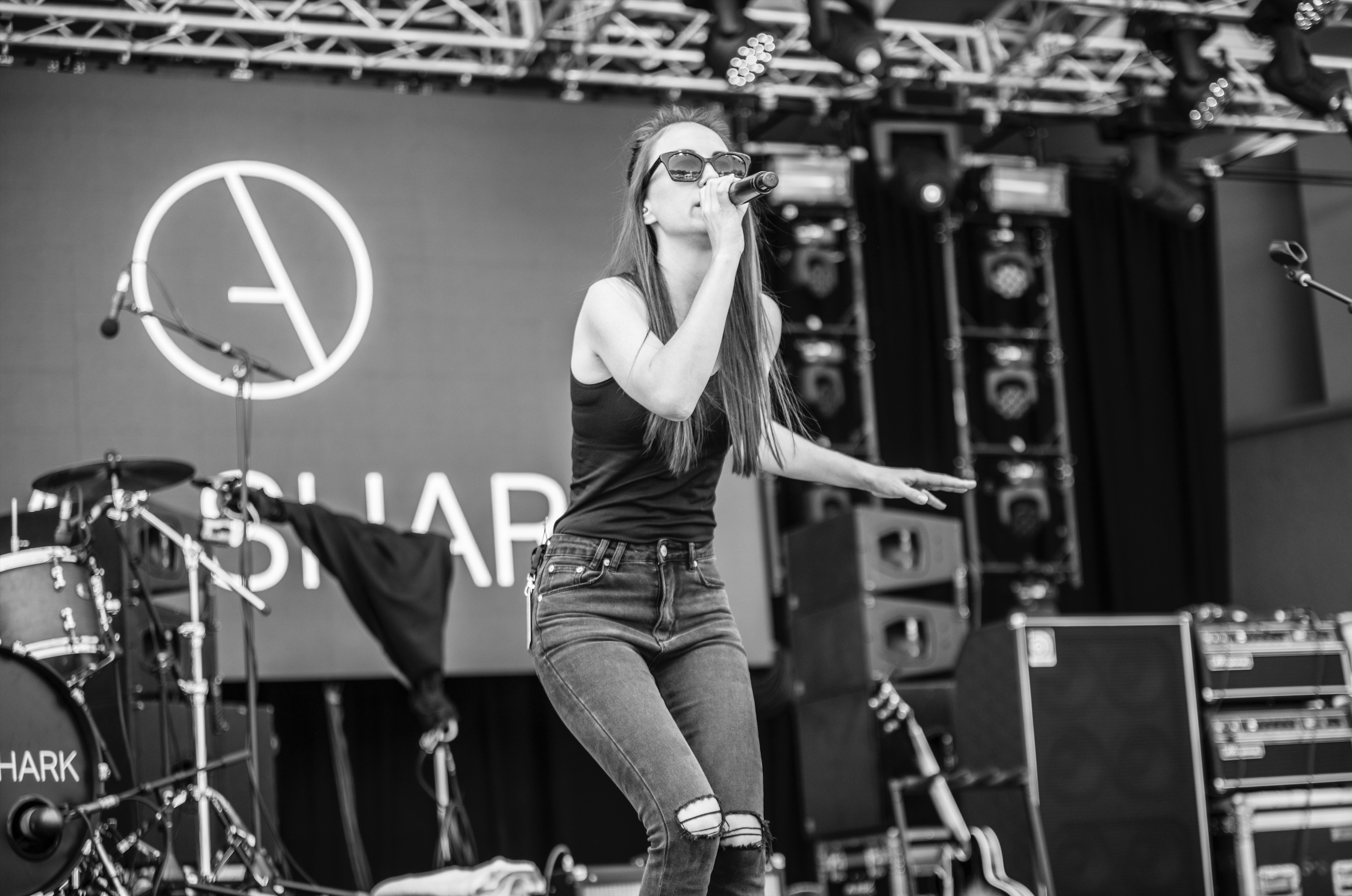 “I had fifteen years of having dudes yelling out shit in pubs and dealing with different situations all the time and I just know how to handle it and how to hold myself and what to say that will cleanse and that comes with a lot of time. But also it’s like I’m playing to all these people, I never though I would get here. I called it quits, you know, why would I spend this time being a nervous wreck? Even if everything crashed and burned, I still did it, it doesn’t matter, I might as well just fucking enjoy it. I just get out there and I’m just like, you know, nothing bad can possibly happen because I did it.”

Ultimately the thing that drives Amy to keep going is her love of songwriting. While the detractors do provide some ‘fuck you’ motivation (or ‘hateivation’, as she calls it), it’s mostly the craft itself that makes her stay the course. Says Amy:

“Eighty percent of it is I just love writing songs. I love it. That’s what I love to do and I just do it every day. It’s exciting and I never know what I’m going to come out with and I love playing guitar and then the other side is, there were so many people that weren’t around…I didn’t need you there and I don’t need you now, but I don’t really think about that anymore.”

Along with the songwriting comes the ‘sound’. Amy went on to detail how she found her sound with the producer Eden Mulholland, a sound that is demonstrably relatable to audiences around the globe:

“Eden was a crucial part of that. He really pushed me out of that folk sound that everyone was telling me ‘that’s the sound you need’ and rararah. No-one needs to be anything, I wanted to be edgy and bold and Eden forced me to dabble in beats and synths and then I was addicted from there. It looks weird on paper having an acoustic guitar with a big hip-hop beat and a couple of big dub synth beats, synth drops in there, but who cares? As long as it connects and you’re writing about real, honest things and your whole heart is in that vocal and the melody is really strong, it really doesn’t matter. It forced me to not be scared. That’s what the Amy Shark sound is.”

It is important to Amy to perform in the more regional areas of Australia as well as the major centres and overseas, and she is doing just that with this tour. Amy says she took a lot of notice and listened to a lot of people when on her recent National tour:

“So many people had travelled (to see me) and so many people I spoke to were like my sister or my parents couldn’t come because we are actually from Geelong or from here or from there. It’s always been something I wanted to do and it was a discussion with my team for a really long time. Also online, I read a lot of where people are coming from, obviously I want to service as many fans as I have around the country. It just felt like a really perfect time (before moving on to the next phase of Amy Shark). I haven’t been to too many of these areas and I am really looking forward to it.” 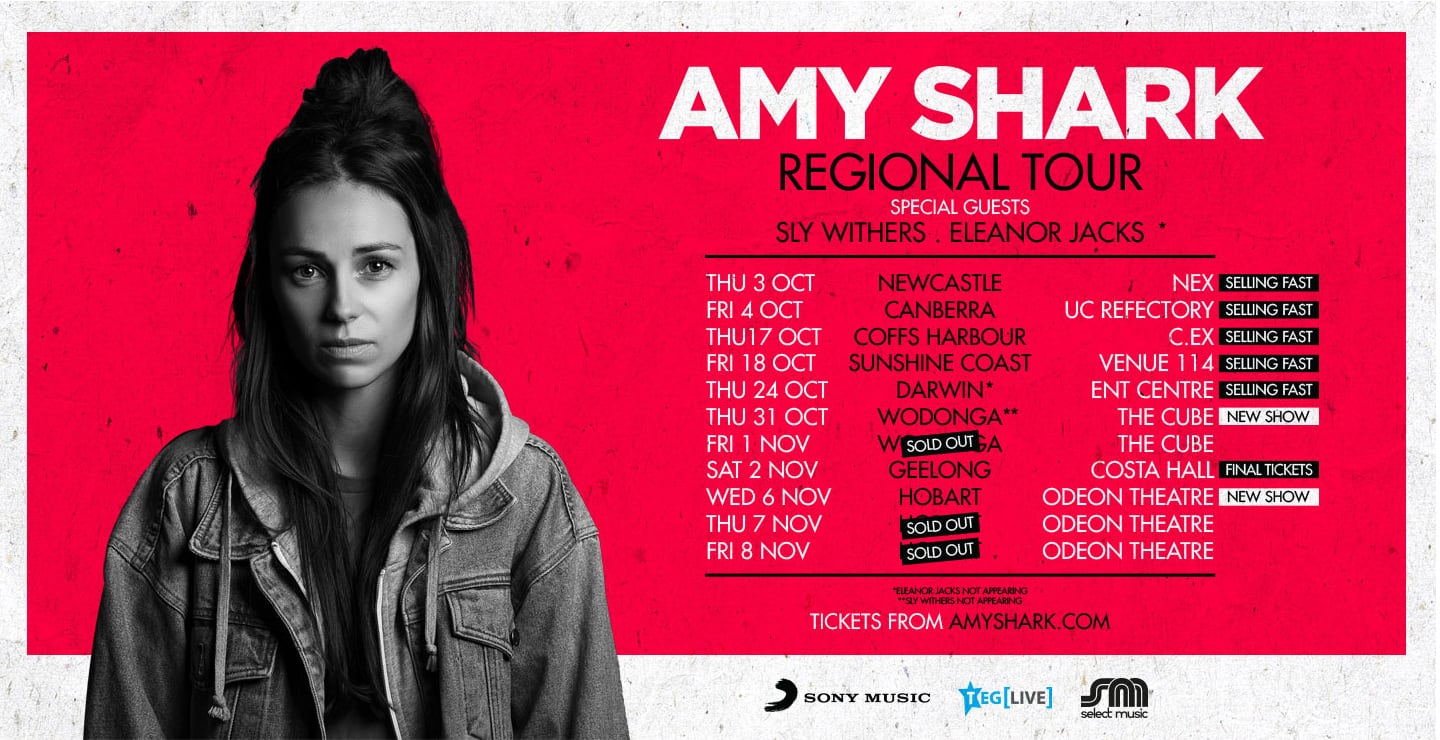 Amy is particularly looking forward to playing Darwin again, as she has done a couple of times now for Bass In The Grass – not only because of the appreciation she receives here, but because she loves the heat, as she readily admits. Amy plays the Darwin Entertainment Centre Thursday October 24th(*), and tickets are moving fast. Secure your ticket now to see this superlative performer up close and indoors and make her feel welcome in this hot place – tickets are available at:

*Amy Shark wishes to advise you that due to an unavoidable change of schedule her performance at The Darwin Entertainment Centre on Friday 25th October will now take place on Thursday 24th October. Your ticket(s) will be valid for the rescheduled date and do not need to be exchanged. Simply present your existing ticket(s) at the venue on the new date. If you are unable to attend on the rescheduled date, you have 14 days to submit a request for a full refund.