Outspoken and captivating artist BIRDZ has spoken to Australia’s heart with his singles ‘Black Lives Matter’ and ‘Rise’, discussing the hardships and discrimination that Australia’s Indigenous community experience. 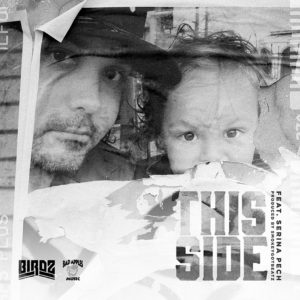 With legions of fans rising up, BIRDZ is ready to launch his debut album, ‘TRAIN OF THOUGHT’ with lead single, ‘THIS SIDE’ Featuring Serina Pech. It’s an upbeat, shoulder rolling, groover! All attitude and statement of intent. It’s an anthem for world domination by the man who’s not afraid to go for it and ruffle some feathers if he has to, dissing the haters.

THIS SIDE is the MC’s testament to the integrity of Bad Apples Music and the key driver of the record label and the signed artists – Black Excellence. BIRDZ teamed up with Darwin singer songwriter Serina Pech who joins his melodic rhymes with smooth singalong chorus.

“It’s a celebration of the Bad Apples Music movement and our presence in Australia’s music industry – planting the flag so to speak and letting everyone know that we’re here to stay.” – BIRDZ

BIRDZ is one of the country’s most exciting hip-hop acts on the rise, already having performed at St Kilda Festival, The Hills Are Alive and Groovin The Moo, after supporting A.B. ORIGINAL, THE FUNKOARS, THUNDAMENTALS & SAMPA THE GREAT in 2016. The Butchulla emcee is solidifying himself as the country’s most exciting hip-hop act to emerge from the scene.

Birdz debut album ‘Train of Thought’ is set for release in August 2017 through Bad Apples Music.