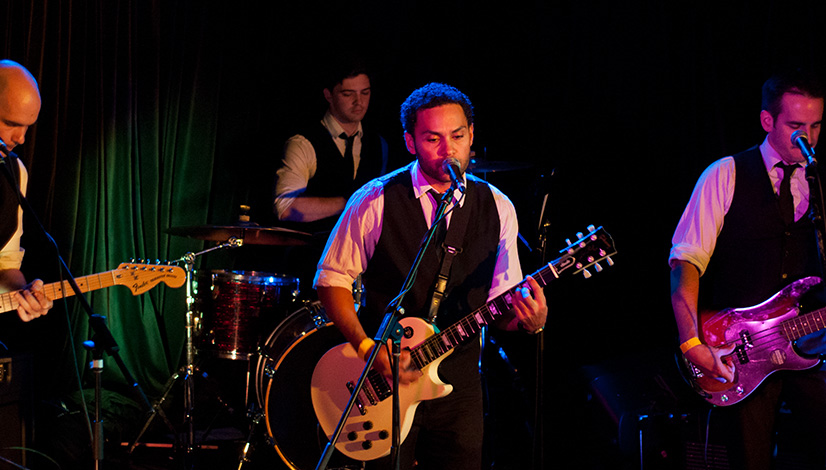 Three Darwin boys and a Nhulunboy walk into a bar….. sounds like the start of something fun, which is exactly what’s happening when Pole Top Rescue walk into the Whole Lotta Love bar for their Rhymes and Riddles tour.

Since their debut in 2012, Pole Top Rescue have cleverly cemented their name in the Darwin music scene. With songs such as their Territory-inspired comic track Budju and dance floor track Ladida, these boys are one of the most vibrant live-show bands Darwin is churning out at the moment.

I managed to grab PTR’s bass guitarist, Kieran, just before the boys take off to Victoria to tell Foldback more about what our southern cousins can expect from the tropics.

What’s the story behind the Rhymes and Riddles EP?
We wanted to put something out that covered all areas of the band, from silly and sexy to soft and sensitive.

So, how’d the Melbourne tour come about?
We hit up a band called Follow No Rules on Facebook, the rest is history!

What the schedule for Melbourne?
We are playing with a few Melbourne bands at a venue called the Whole Lotta Love bar.

And what can we expect from you when you return home?
We are gonna launch the EP up here upon our return.

How important is it to have live music venues in Darwin for bands like you to gig at?
To quote Shakespeare, “how sharper than a serpents tooth it is to not have a place to do a gig”.

What’s your favourite song to perform in the song list?
One of the new ones that we haven’t recorded. Ladida is good too because it becomes one big out of tune choir. Budju is ok too….

Has anyone at your shows ever asked you to explain the song budju?
Nah, they just mostly shake their booty to it.

I hear there’s a video? Tell me more about that.
We’ve done two. Budju is about the band trying to impress a girl all over Darwin and failing. Ladida is about dancing out of crappy situations, with some help from a magical wheelie bin that plays Pole Top Rescue!

Before you perform live, do you guys have any specific things you do to get you ready?
Lachlan gives himself arm hickies, Ben takes selfies for his Instagram and hashtags it with stuff like #thuglyf, Stu eats a variety of Bolivian cheese and I do bench-press.

I saw you perform a cover of Eminem recently. Can we look forward to more musical experimentation from you in the future?
Absolutely! We are working on a variety of random covers, John Farnham and The Prodigy are next.

If you had to compare yourselves to the seven dwarfs, who is who?
Lachlan is sneezy, Ben is happy, I’m Doc and Stu is Sleepy. We are yet to find our Snow White…

If anyone knows where Snow White is hanging out, tell her to catch up with Pole Top Rescue on their website