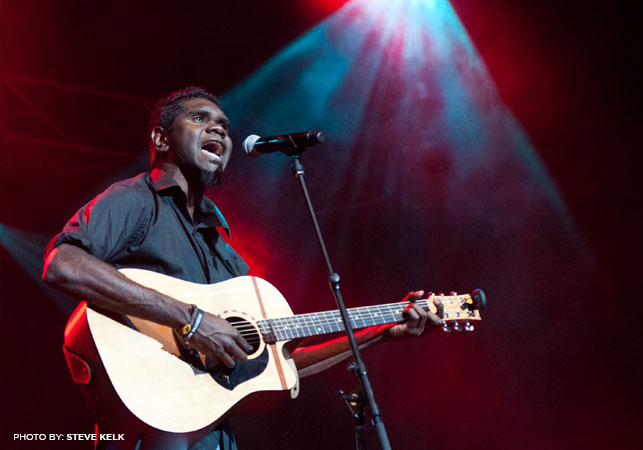 Indigenous artists from across the country gathered at the Darwin Amphitheatre under a star-filled Dry Season night on July 25 for the 2015 National Indigenous Music Awards (NIMAs). Foldback Magazine was there to capture the event.

Following a Welcome to Country by Richard Fejo, Malarndirri McCarthy and Kamahi Djordon King got proceedings underway. The Hon. NT Minister for Arts and Museums, Garry Higgins MLA gave an opening speech before Yirrmal started the evening’s entertainment with a stirring performance of percussive acoustic guitar and vocals.

Performances continued throughout the evening in between awards with the likes of Zane Francis (triple J Unearthed NIMA competition winner), The Painted Ladies with NIMA Hall of Famer, Vic Simms, Frank Yamma, B2M, Blekbala Mujik and Gurrumul Yunupingu. James Mangohig (one half of the Darwin-originated electro-duo Sietta) made an on-stage appearance. The evening was rounded off with an hour-long set by East Journey ft. Yothu Yindi with a full compliment of dancers, both traditional and contemporary.

The awards themselves gave recognition to the fine pool of Indigenous talent that Australia has to offer. Larger than life Indigenous rapper from Shepparton Victoria, Briggs, typically sent the crowd into a spin as he stopped on stage to ‘pose’ in bodybuilder fashion with an icon of Australian film and theatre, Jack Thompson, who had just presented one of two awards to the man mountain of Australian Hip Hop. His Victorian stable-mate Philly lit up the stage with a smile a mile wide as this polite young man accepted his award for New Talent. It was a night for the stars to shine both in the sky and on stage as artist after artist made their way to the podium to receive richly-deserved recognition for their talents and efforts.

The following winners for the 2015 NIMAs are:

Artist of the Year
Jessica Mauboy and Dan Sultan

Album of the Year
Sheplife – Briggs

Song of the Year
How much does your love cost? – Thelma Plum

New Talent of the Year
Philly

Foldback Magazine was honoured to have been given access to artists for some one-on-one interviews and to capture the evening – check out our highlights video, photographs and interviews on our Facebook page.