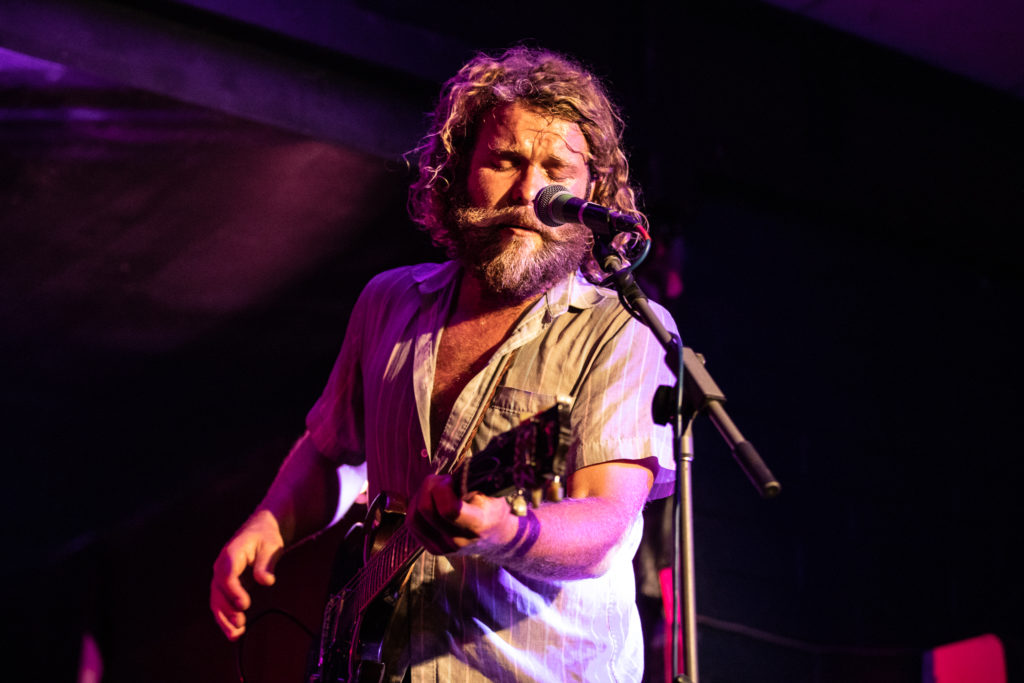 I arrived at the Rails early and wandered outside to grab a glass of water. As I reached the door, I leapt in surprise as the door was flung open from the outside. A man with wild, sun-bleached hair, tanned skin, casual shirt and slightly worn appearance held the door back for me to walk through first, his sparkly, blue eyes and huge grin smiling at me. I thanked him then did a double-take as I walked through. I was sure I knew him. But I could hear the first chords of the support artist waking up the Rails, so I skolled my water and headed back inside. 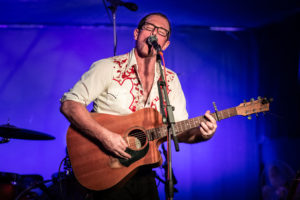 Dave Garnham is a local legend and this was actually the first time I was lucky enough to see him play live. It’s easy to see why he has won so many awards for his songwriting – his songs won me over straight away. He talked about how winning the Americana category in the International Songwriting Competition changed his life – he’s still working the exact same job now that he was working 6 years ago when he won, much to the crowd’s amusement. He has an air of quiet confidence on stage and mostly lets his songs do the talking. Which is good because they have a hell of a lot to say. He was the perfect warm-up to the blues-roots-rock tornado that was about to blast the stage.

The Rails got dark, then the scruffy-haired man with sparkly eyes who had been casually wandering around the crowd holding doors open for girls earlier walked up on stage. Oh, that’s where I knew him from.

I’ve seen Steve Smyth play a couple of times and knew I was in for a rollercoaster ride of emotions. He played his first few songs solo, just him and the guitar. He coaxed sounds out of both his voice and his guitar that I don’t believe live in my own voice or guitar. His voice easily goes from low, raw, guttural and rumbling to sweet, high, easy and light. Dark, howling growls to soft croons. It’s easy to see where the comparisons to Jeff Buckley and Tom Waits come from.

His drummer, Brock Fitzgerald, took to the stage and stepped things up even more. Brock is an amazing, wild drummer, mesmerising to watch and the two just work perfectly together. I think the broken-drumstick count was at 5 by the end of the set. I think that says a lot.

The energy is unrelenting and powerful. Steve’s music would never be described as easy-listening. He makes music with his entire body – contorting, moving and expressing. His leather, small-heeled shoes slamming the stage as another instrument. It feels like the songs shine out of every part of him.

Highlights of the night were when he absolutely owned his cover of Sam Cooke’s “A Change is Gonna Come” and when he stopped everything to do some spoken word. No microphone, no drummer, no guitar. His huge voice easily rumbling throughout the venue. It was raw and powerful. There were still rude, idiots in the back talking loudly, however, and it brought on a wave of laughter as he told them to shut up.

Steve Smyth makes timeless music and delivers it with pure emotion and soul. You would be hard-pressed to not fall in love with his music after watching a live show, no matter what your music preferences are. He is a true star. But also a modern-day travelling troubadour who still wanders around the crowd like an Average Joe, having a beer before the show and holding doors open for girls like a true gentleman.